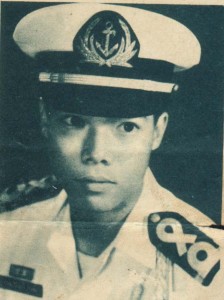 When Saigon fell in 1975, my father had just turned 24 years old and could not imagine fleeing the country of his birth and leaving his family behind. So, he decided to stay in Vietnam and was subsequently captured and detained (along with other men who were in the military, who were connected to the South Vietnamese government, or who owned a significant amount of property) in a “re-education camp” for almost 4 years. In this camp, my dad would undergo intense physical labor and malnutrition.

My dad tells me that he was treated as a Prisoner of War, at first. Conditions, however, went from bad to worse as the victors of the war attempted to “reform” those unfaithful to the Communist cause. Days were filled with harsh conditions where the men performed tasks, like clearing the jungle and brush, while unsure of where unexploded mines still lay. Nights were filled with lectures and speeches ingraining thoughts of freedom and prosperity in their minds, while essentially stripping away those precious items from the prisoners. My dad says that the worst part of the camps was that he never knew when he would be considered “reformed” and when he would gain his freedom. My dad soon realized that these things may never happen.

In 1979, he and a few other prisoners managed to escape from the camp and gain passage onto a boat that was headed for Malaysia. In my dad’s reflections on his experiences during and after the war, he has never told me about how he was able to escape from the camp and whether or not he lost any friends along the way. After the escape and the terrifying experience on the small boat, he arrived on the coast of Malaysia in February of 1979 and stayed in a refugee camp until September of that year when the United States government processed him and flew him to Houston, Texas.

After spending some time in Texas, my dad was sponsored by an organization in Columbus, Ohio and ended up attending school there. He found a job and was able to pay his way through school (with government assistance). By the time of his graduation in 1985 at the age of 34, my dad was settled in his life in Ohio. In 1987, he made a trip to California to visit friends that had settled in this state, one of them being my mother. After helping my mother and her sisters open a café, he returned to Ohio. He decided to move to California permanently, however, in 1989 and I was born two years later in 1991.