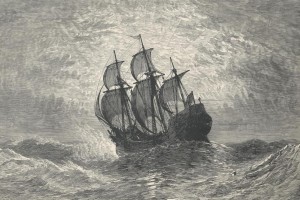 John Edminster was a young soldier in the English Civil War. He fought with a Scottish army allied with Charles II of England, against the English Puritan leader, Oliver Cromwell. Cromwell won the war, and John was captured by the Puritans at the Battle of Worcester in 1651.

Cromwell wanted to sell the prisoners as slaves. Some were sent to plantations in the Caribbean, where nearly all died of disease or ill treatment. Luckily, John was sent to the Massachusetts Bay Colony, founded by the Puritans. He arrived on the ship “John and Sarah” on May 13, 1652.

At this time, the Massachusetts Puritans were not fond of slavery. Instead, the Rev. John Cotton wrote Cromwell that “They (the Scots) have not been sold for slaves to perpetual servitude, but for 6 or 7 or 8 years, as we do our own.”

Thus, John was indentured to a mill owner in Durham, New Hampshire. Later, once freed, John became a shipwright in Charlestown, Massachusetts (now part of Boston).

Eventually, Charles II regained the throne of England and the Puritans were ousted. But John did not return home. Apparently, he was satisfied with his treatment by his Puritan “enemies” in Massachusetts. Indeed, he married a Puritan woman, as did the next seven generations in my line. John died in 1714, at about age 80.

A question remains about the “Edminster” surname. All Edminsters in the world today appear to be descendants of John. Historically, “Edminster” was not a surname in the British Isles or anywhere else. It is clear from the records that the English clerk who recorded the names of the Scottish prisoners had difficulty understanding their accent, which resulted in huge misspellings. John himself was illiterate, so he could not have helped. Historians believe it may have been the Scottish name “Edmonstone.”