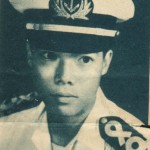 When Saigon fell in 1975, my father had just turned 24 years old and could not imagine fleeing the country of his birth and leaving his family behind. So, he decided to stay in Vietnam and was subsequently captured and detained (along with other men who were in the military, who were connected to the South Vietnamese government, or who ... END_OF_DOCUMENT_TOKEN_TO_BE_REPLACED