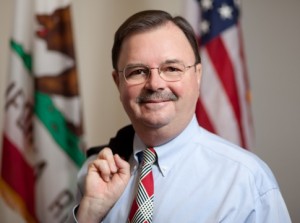 Piecing together a family’s story of immigration to the United States can be a challenge for many people. Richard Sherman Gordon’s family tree has roots that reach back hundreds of years in America, but most of their stories have been lost over the generations. What remains are tidbits of family lore, and for Rich’s family, there is also a lovingly written memoir by his maternal grandfather, Francis “Frank” H. Sherman, Jr.

If you ask Rich about his heritage, he’ll tell you right away that he is Scottish English – English from his mother’s side, and Scottish from Aberdeen on his father’s side – with some good stories in between. First, a look at Rich’s English heritage.

According to family lore on his mother’s side, the Sherman branch of Rich’s family emigrated from England in the early 1600s, and they are descended from the same Sherman family as Roger Sherman, a signer of the Declaration of Independence.

Rich was born in San Mateo in 1948 making him the fourth generation to be born in the San Francisco Bay Area in California.

Before Rich’s great-grandfather, Francis Sr., worked for C&H Sugar, he had an adventurous life. Frank Jr. said that his dad, Francis Sr., ran away from home when a young boy and joined the Barnum & Bailey Circus. He was a roustabout (a circus laborer), but started to learn to fly the flying trapeze. He met a young lady about his age and they became a professional flying trapeze team. They married, but at one performance on the flying trapeze, the catcher missed her and she fell to her death. Nets were not used in those days as not having them made the show all the more suspenseful.

Very soon after this tragedy Francis Sr. left the circus and became a fruit rancher in Newcastle outside of Sacramento, California and from there he went to work for C&H Sugar in Crockett, California as their Warehouse Supervisor. 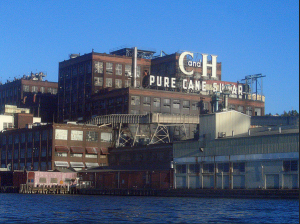 A Sherman story straight from the pages of California history is when Rich’s grandfather Frank was six years old and his family was returning to Crockett to live after a couple of years living back in San Francisco (C&H had shut down 1903-06). They spent the night at the Carquinez Hotel and were awakened early the next morning, April 18, 1906, by the devastating San Francisco earthquake. The family had left all of their household belongings in San Francisco and they were lost in the huge fire that followed. Plus there was no insurance money as the earthquake and fire were deemed “an act of God.”

Frank remembers his father bundling him into a blanket and joining other guests on the roof of the hotel where they looked west thirty miles and watched the red, red skyline as San Francisco burned to the ground. Frank said that it was not the earthquake that did the worst damage, but that there was no water for the fire department as all the water mains had broken. 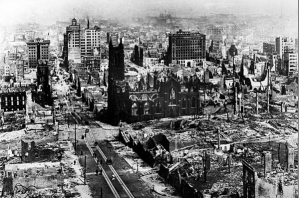 While Frank at age six was watching the San Francisco fire from Crockett, his future wife, Berenice Ord, also six years old, was watching the fire from a rooftop in San Jose. Later, both Frank and Berenice’s families moved to Oakland where they met on the first day of high school.

Berenice Ord was the daughter of William D. Ord and Anna Rankin. William emigrated from England in the late 1800s and ended up in Colorado Springs working as a civil engineer for Standard Oil, a fast growing business. Later, they came to California with Standard Oil where William was involved with the early exploration for oil in the Central Valley.

Turning to look at Rich’s Scottish heritage on his father’s side, family lore passes down that the Gordon branch hails from Aberdeen, Scotland, possibly coming in the 1800s.

By the late 1800s, the family was living in the coal mining regions of Pennsylvania. Rich’s grandfather, Wilson Cool Gordon, was born in 1897 in Clinton outside of Pittsburgh, Pennsylvania. It was a region rich in bituminous coal, a relatively soft coal, and at the turn of the 20th century, this area was filled with many mining towns.

Eventually, Wilson settled in Muse, Pennsylvania, about 19 miles from his birthplace. He was the store manager of the Union Supply Company store in Muse during its heyday in the first half of the 1900s. 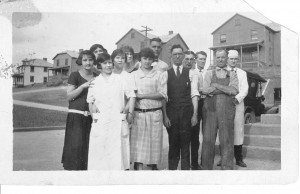 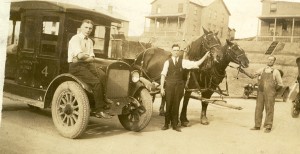 Union Supply Co. transport, both auto and horse. Wilson Gordon is center with tie. The Gordon home is center back.

According to Chris DellaMea of coalcampusa.com, the Union Supply Co. was the retail company for the H.C. Frick Coal & Coke Co. stores. DellaMea says that company stores sold groceries, clothes and everything else, plus served as a central gathering place for the community, nearly all of whom worked in the Frick-owned coal mines. These were the days of company towns, with company schools for the children and company-provided housing. The higher ranking job that you had, the larger your house. 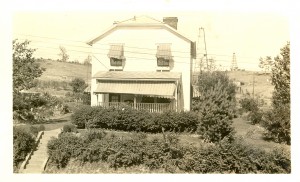 The Gordon home some years later.

It was a lifelong job for Wilson. He worked for the Union Supply Co. for 36 years, a time that followed the rise and fall of coal mining in that area.

Rich’s father, Ralph Gordon, was born in 1926 around this same area of Pennsylvania, but left when he joined the US Navy in 1944. He was shipped out to Hawaii, but on his way he had a layover in San Francisco. He went to a USO (a service organization that supports US troops) dance and while there met his future wife, Bettyanne Sherman, who at the time was working at an insurance company in San Francisco. Bettyanne had joined the wartime workforce – which needed people in professional jobs – after two years at UC Berkeley.

In the meantime, Bettyanne’s father, Frank Jr., had graduated from Oakland High School, did college prep at UC Berkeley, transferred to and graduated from the Secretarial School in Oakland, married his sweetheart Berenice (who had graduated from Teacher’s College), and was working in the automobile dealership business. The company he worked for sent him to Hawaii to open a dealership in Honolulu.

The timing could not have been better. With both Ralph and Bettyanne in Honolulu at the same time, their romance took off, and they were married there before moving back to San Francisco. Rich was born in 1948 in San Mateo and grew up there as well. His father, Ralph, first went into the auto business with his father-in-law, but subsequently worked for other dealerships selling cars for his entire career.

Today, after hundreds of years of his family living in America, Rich continues to have a meaningful identification with the roots of his heritage, both Scottish and English. So much so that when he was married, he wore the Gordon Scottish kilt, and his husband, who is Irish, wore the Donegal kilt.

Assemblyman Gordon’s story was told to and written up by Carolyn Williams for MadeIntoAmerica.org, December 2014.