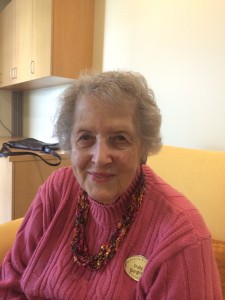 Polly Bergtraun grew up in Holland during the time of the Holocaust. When she was a teenager, Holland was raided by the Nazi’s. Every year after the Nazi occupation the situation for Jewish people worsened. She was forced out of her school and her home and she had to give her valuables to the Nazi party. As the situation became worse her non-Jewish friends became incredibly worried about her and decided to help her go into hiding.
She had an older sister, a twin sister, and two parents. Her family was separated and she was given false identification papers and was went to live with another family. She became close with the other family, but she was still living in hiding. When the SS came by looking for Jews in hiding she pretended to be the daughter of a farmer. She managed to avoid being caught.

After the liberation she was re-united with only a portion of her family. Her twin sister had been betrayed and turned over to the Nazi party. She was murdered at Auschwitz.

Polly went to start a new life. She went to a college in Holland and got a job as a stenographer. Her family had asked for American visas before going into hiding, but they weren’t granted until after the liberation. She went with her sister and mom to the US, while her dad stayed in Europe to make money. Her family moved to New York, but quickly got sick due to the high-levels of pollution. Her family had relatives and friends in San Francisco so she moved to the west coast.

She sat on the train for 3 days realizing how large the United States was. In Holland she could be anywhere within a day, but in the US it took 3 days. When she finally arrived San Francisco she started looking for a job. Eventually she found a job working for the Netherlands Information Service, a Dutch Government agency. Polly met her husband Eric, who fled Vienna, Austria, living in a ghetto in Shanghai, China during the War and then immigrating to San Francisco in ’48. Poly and Eric met in San Francisco, fell in love and married there,
had kids together and lived happily in the United States

This story was written up by Jason Scharff, a student volunteer who interviewed residents of the Moldaw Residences in Palo Alto.