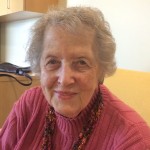 Polly Bergtraun grew up in Holland during the time of the Holocaust. When she was a teenager, Holland was raided by the Nazi’s. Every year after the Nazi occupation the situation for Jewish people worsened. She was forced out of her school and her home and she had to give her valuables to the Nazi party. As the situation became ... END_OF_DOCUMENT_TOKEN_TO_BE_REPLACED