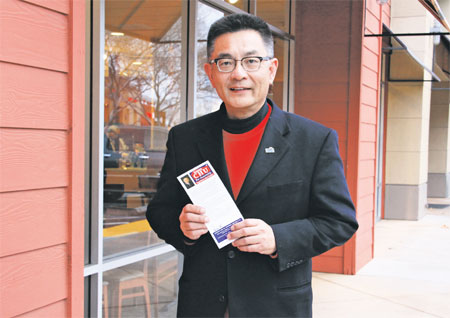 He wasn’t always San Jose City Councilmember Kansen Chu. When he arrived in the States, he had been Kansen Chu the engineer and then Kansen Chu the waiter. Though he grew up in Taiwan and attended the National Taiwan University of Science and Technology with a major in electrical engineering, his parents and two brothers had followed his uncle to the United States and insisted that Kansen finish his studies before joining them in California.

After doing just that, Kansen arrived at California State University, Northridge, in 1976 to receive his master’s degree. “It was a natural progression,” he said. However, six months into his relocation, he returned to Taiwan, married his girlfriend, and came back into the U.S. once again with his wife in hand. Two years later, in 1978, he was hired by the International Business Machines Corporation (IBM), a computer software company, which was stationed in San Fernando Valley, and moved the family residence to San Jose.

In 1989, he, his wife, and a couple IBM colleagues took over a Chinese restaurant in San Jose and began building its reputation as the largest Chinese restaurant in the area. During the years between 1989 and 1998, he worked two jobs: one as a technician for IBM and the other as a waiter and occasional busboy. As the restaurant expanded, nonprofit groups began flocking into the eatery in hopes of successful fundraising. “It was a hit for donations, food, and cash,” Kansen chuckled. Through this process, Kansen became familiar with many of Silicon Valley’s elected officials and local activists.

Soon, Kansen was more involved in the community than ever before. “I worked my day job as an engineer, then went home to some crazy things,” he joked. At the time, San Jose was not heavily populated by the Asian ethnicity, but Kansen knew that the existing 20 percent deserved more representation. It was this ideal that led the Asian community to become incredibly cohesive whenever any person of Asian descent ran for office. With encouragement, Kansen decided to enter himself in the election for Cupertino City Councilmember. Though he received much support, he came away with a loss.

Not one to hang low over any setback, Kansen redevoted his attention to his restaurant. “People really invested in me,” he said. “How could I stay unhappy?” Then, in 1999, after losing his job at the IBM, he gave it another go: he entered the running election for San Jose Councilmember. However, fate said it wasn’t his time quite yet, and Chuck Reed won the majority vote. When the time did come, it came in 2002, when an opening on the school Board arose. Supporters rallied behind Kansen and gave him the push needed to run for the seat; he did and won. “That’s when I really got into how government works,” he said.

He excelled in the position and, four years later, was re-elected. However, the year after re-election, Reed was elected for mayor of San Jose. In his wake, Reed left  a hole in City Council, with two more years unserved. The Council decided to hold a special election for the spot, in which Kansen’s name was entered and came in first. “I was very happy to get the support of the public,” he mused. As a man with natural charisma and sincere care for the community, he was re-elected two years later and was able to build a strong base over his six years as Councilmember.

Though Kansen started off on the self-proclaimed broken rung of the ladder, he steadily climbed to the top through dedication, true concern, and sustainment of admirable qualities. “When I first came, I could not sleep at night because it was so quiet,” he exclaimed. “In Taiwan, it was always noisy, but here, I could hear a pin drop.” Now, he sleeps peacefully, appreciating the trust the public has placed in him. As a continuation of that trust, Kansen decided to run for San Jose Assemblymember this year. “Seven years as a Councilmember, I’m still learning new things,” he said. “Hopefully, if I win this seat, I can do more and truly make a difference.”