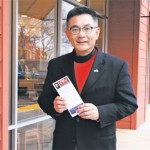 He wasn’t always San Jose City Councilmember Kansen Chu. When he arrived in the States, he had been Kansen Chu the engineer and then Kansen Chu the waiter. Though he grew up in Taiwan and attended the National Taiwan University of Science and Technology with a major in electrical engineering, his parents and two brothers had followed his uncle to ... END_OF_DOCUMENT_TOKEN_TO_BE_REPLACED