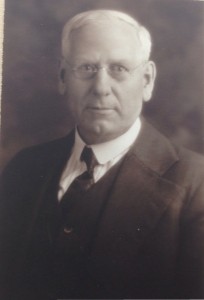 Johannes Hokannson was a religious man, an itinerate preacher in Sweden. His wife, Cecilia came from a wealthy family. Cecelia’s family helped her and her children considerably, but even so Grandpa said they were poor in Sweden. The state church disapproved of such preachers in Sweden; hence, he left with his wife Cecelia, and the six youngest of their seven children. John Adolph, my grandpa, was the middle of the seven children, born 12/10/1860.

They came to America in 1872 when he was 12 years old – to Fish Lake, Minnesota, a little north of the good soil! He saw that education would be the route out of hunger, and worked to put himself through Gustavus Adolphus College, (probably with some financial help from the church), graduating in the first class in 1890. He earned an MA degree in 1893 from the University of Minnesota and married Hilda Newstrom, a farm girl from Watertown, Minnesota. He taught Latin and Greek and a little mathematics until he retired in about 1938. He died when I was seven in 1942.