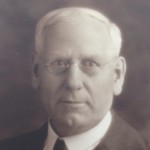 Johannes Hokannson was a religious man, an itinerate preacher in Sweden. His wife, Cecilia came from a wealthy family. Cecelia’s family helped her and her children considerably, but even so Grandpa said they were poor in Sweden. The state church disapproved of such preachers in Sweden; hence, he left with his wife Cecelia, and the six youngest of their seven ... END_OF_DOCUMENT_TOKEN_TO_BE_REPLACED