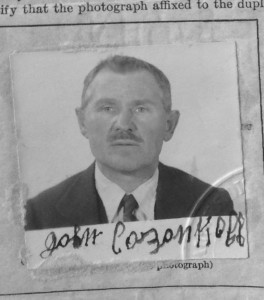 My Grandma and Grandpa decided to leave Simbirsk, Russia and begin a new life in the United States. They started their emigration from Simbursk in Oct. 1900 traveling through Siberia to China. Eventually they left Harbin Manchuria China, with John (Ivan), their only surviving child, and made their way to Kobe, Japan. In March of 1910 – 10 years since beginning their journey, they left Kobe for Honolulu, Hawaii. They arrived 2 weeks later on the 2nd of April 1910. They were interned there for 1 year because of communicable diseases. There Antonina was born on November 13, 1910.

In April of 1911 they found passage to San Francisco, California. Because work was hard to find there, they made their way to the lumber camps/mills near Eureka/Scotia, California. In Eureka, Valodia (Bill) was born in January 1913. Yevgenia (Jean) was born in Scotia – August 1914. She’s my mother. In Eureka Yakov (Jack) was born on the 8th of December 1915.

By this time partly do to the particularly difficult manual labor work in the lumber camps/mills, they decided to move to San Francisco when they discovered that carpentry work was available. Walter was born in San Francisco – in March 1918. Their 1st real home was at the top of Kansas Street. They were there for a while until they bought a house on Moscow Street where they remained for the rest of their lives.

This story was shared by Greg Vasutin, a member of Grace Lutheran Church in Palo Alto.