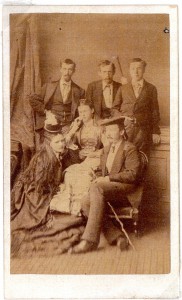 as read by Francis’ great-granddaughter, Holly Brady, a resident of Palo Alto.

Francis Squair (seated with his 3 brothers and 2 sisters) was my great-grandfather. He was born in the Scottish Highlands just east of Loch Ness in 1848. After studying pharmacology at the University of Edinburgh, he and his brothers immigrated to Chicago around 1868. I can’t say why, but I surmise they were victims of the Highland Clearances, efforts by the hereditary landowners to forcibly displace the tenant farmers of the area so that the land could be enclosed and used to raise sheep, which had become a more lucrative endeavor than tenant farming.

Young Francis became a druggist in a fancy hotel in Chicago–the Grand Pacific, where Mary Todd Lincoln settled after the assassination of her husband. By that time, Mary had lost two of her three sons in addition to her husband, and she was showing signs of extreme stress. Often delusional and paranoid, she took to sewing her money and jewels into the hem of her skirts.

When her son Robert decided to commit her to a sanitorium, she fought the idea. There was a trial, and the judge determined she was indeed unstable–allowing Robert to involuntarily committed her.

On the evening after the verdict was read, Mary slipped away from her nurses and came into my grandfather’s drugstore, demanding laudanum, a potent opiate derivative. Suspecting that she was suicidal, he told her no. She was so insistent that he finally went into a back room and made up a bottle of sugar water, labeling it laudanum. She took it, walked into the lobby, and drank the entire bottle. By the time she realized nothing would happen, her son arrived on the scene.

The next day, she was taken to the sanatorium in Batavia, Illinois, where she stayed for several months. She died in the care of her sister a few years later.

My great-grandfather lived in Chicago with his brothers for the remainder of his life.

This story was shared by Holly Brady, a resident of Palo Alto.