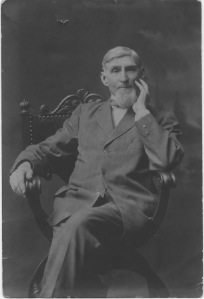 Ken Vanbree’s great grandfather, Arie Vanbree was born in 1845.  At the age of 11, Arie moved with his four siblings and father from the Netherlands to New York by sailing ship. It is believed that Arie’s mother died before the family decided to immigrate. They sailed  on the “Arnold Boninger” a Prussian ship which left from Rotterdam and arrived in New York Harbor on December 8,1856.  Many from this ship settled in Zeeland Michigan.

Arie’s family also went from New York to settle in Western Michigan. Eventually Arie settled in Grand Rapids and worked as a carpenter and woodcarver like his father and grandfather before him.  Grand Rapids, Michigan, was the furniture capital of the world in the late 1800’s because they built so much furniture from the region’s pine trees.  In fact Arie had a number of relatives who also worked nearby as carpenters and woodworkers. Ken doesn’t know if Arie worked in one of the furniture factories but he does know Arie was a successful, profitable carpenter and was able to acquire land and own a hardware store.

Arie married Henritta around 1865 and she was also an immigrant from the Netherlands. Ken found a letter from Arie to one of his friends that was written from Grand Rapids Michigan on May 17, 1862.  In that letter he told his friend that he and Henritta were already married but that they did not yet have children.  He also said that there was quite a bit of work and that he had hired a man to help him out and was thinking of hiring another.  He would have been 17 in 1862 so he got an early start on both marriage and his career.

This story was shared by Ken Vanbree with Made Into America, reporter, Alexis Faust.