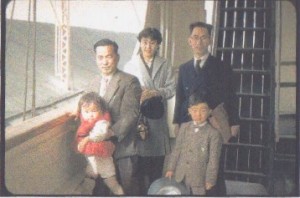 My father was an adventurous scientist and my mother was a modern mother in Japan. They brought our young family over to United States when I was a toddler in 1957 and then back again as a first grader in 1961. By age six, I had crossed the big Pacific Ocean by ship three times! I started elementary school here not knowing a word of English.

One photo is our family on one of the ships and the other is of me wearing a kimono at a birthday party.

I grew up the shyest student you can imagine! But I did work hard. My parents must have been proud that all four of us siblings went on to graduate school in various fields. My degree was an MBA from Stanford.

Somehow I overcame my shyness to start my own consulting business, write a book about America’s future (The Third Century) and eventually run for the city council to become Mayor of Palo Alto! I became the first Asian elected to the city council in 2001. I was proud to lead the city in “Building a Green Economy through Innovation.”

I am blessed to have a wonderful husband and two daughters.