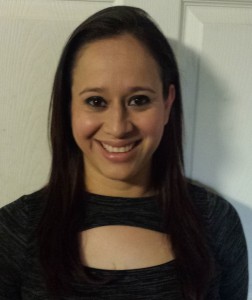 Yancie Alfaro was born in El Salvador, Central America. Her father passed away when she was five years old. Her mother took care of her and her four siblings. When Yancie was in high school, she met Rodrigo Alfaro, who fifteen years later is her husband. In 2003, Rodrigo moved to the United States to continue his studies and Yancie studied veterinary medicine at the National University of El Salvador. So they decided to have a long distance relationship, which was for nine years. After that time they decided to get married and Rodrigo filed a petition to request Yancie with the fiancé visa.

When Yancie had two months in the United States, San Francisco, California, Yancie and Rodrigo got married in 2010. The first months in America were a challenge for Yancie because she hadn’t studied English before. Yancie was taking ESL classes and working at the same time. Yancie was working as a caregiver for seniors in San Mateo County, and it was a good place to start because Yancie met many good people there who needed someone who could speak Spanish. Yancie also could practice her English helping the seniors to translate their health issues to the doctors.

Now Yancie is taking ESL classes in the college of San Francisco, California. Even though she understands more English now than four years ago, she needs to study her grammar and reading more to communicate with English speakers because the United States is her home now. Since Yancie was eight years old, she has had a passion to help animals, which was her reason to study veterinary medicine back in El Salvador. In this moment, Yancie is studying more English than ever because she wants to go to UC Davis to continue studying veterinary medicine and be a doctor of animals and help them.