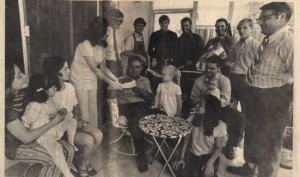 The apricot trees in Santa Clara Valley have been planted and watered to flourish into a fruitful county. The nutrients of the soil in which these trees were rooted remain plentiful in the legacy of Vincenzo Cortese.

In the year 1911,  thirteen-year-old Vincenzo Cortese followed his father and older brother to Chicago alongside his mother and sister. The journey from Trabia, Italy to Chicago took eighteen days aboard the “Calabria.”Only three years later, the family of five returned to their home in Italy. During those few years, however, Vince worked full time, in Nabisco or pedaling strawberries or selling ice blocks door to door. Rugged individualism would prove to be the key to his success as time progressed.

Italians, much like Mr. Vincenzo Cortese were welcome because America needed their skills and willingness to work.  It was only two weeks before Vince was cajoled to America– this time conquering the voyage  alone. He set foot in San Jose, California with the aid of his uncle, Mr. Giacomo Teresi. With pent up energy and dreams, with the idea that the streets were paved with gold, and that everything would follow upon his arrival, Vince was far from realizing his full potential.

Employed in  different locations from ranches to canneries, Vince met Rose Carnova, a fellow Italian immigrant who would later become his wife. The orchard expertise he picked up from his European existence was advantageous to him when the Depression of the 1920s hit. Vince had built a reputation for pruning trees and had gained the trust of business folk. Consequently, banks and real-estate investors offered him land on Mabury Road.

By 1927, Vincenzo Cortese was naturalized and married to his wife, Rose. The two had five children: Lena, Jerome, Dominic, Vincent Jr, and John– all of whom learned to work living in a self-sustaining “enclave” of Italian-Americans in Luna Park. Dominic Cortese himself remarks that he “learned to work, that’s for sure.”  Vince’s self-made prosperity would continue during World War II, Cortese owned land and developed it, he was involved at the forefront of 50 food processing plants in Santa Clara Valley – shipping produce all over the world. It was a time period in which Silicon Valley had the potential to feed the world.

Vincenzo Cortese had little to no formal education, but he was self-educated, articulate in Spanish, Italian, and Portuguese. Language was a barrier, but he mastered linguistics nonetheless and perfected it with the arrival of the television. Despite his insistence of being referred to as a farmer, Dom recalls his father’s involvement in the expansion of San Jose in promoting annexations. His son, Dominic Cortese, became the youngest person ever elected to the Board of Supervisors in the county of Santa Clara and to head a major California County. His grandson, Dave Cortese has been active in politics as well and is running for mayor in San Jose. The hard work, sweat, and tears Cortese had devoted to working proved fruitful not just to his family, but to Silicon Valley and to the world. The initiative he took nearly a century ago remains at work through each passing generation.

This story was shared by Dom Cortese and written by Chia-Ry Chang Ureña.