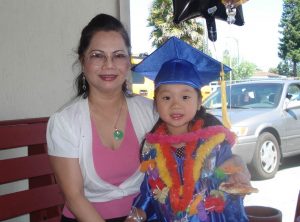 In South Vietnam, the famous, and well-known Ly family enjoyed life and observing their traditions. Thulan’s father had a successful business, but turned it over to one of his sons so he could become a monk while spending two years in a cave at the top of Ba Den Mountain.  When he returned to his family’s land he erected a 9-story temple. He was a well known man in the community and he helped many people stay safe during the American War. 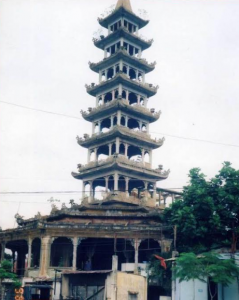 During the war, many people lost their homes, and they sought refuge in his temple. Eventually, there were thousands of people staying in her father’s temple, and even in his home. Lan remembers watching her mother cook day and night for all the people that would seek asylum. The family’s entire property was slowly decreasing even as the number of refugees increased. Another hardship the family encountered was Lan’s mother’s death during the war.

In 1975, after the war the Communists from the North came to the South and stole people’s properties. Many people tried to escape from the Communist regime by sea on boats but unfortunately many died. Some of Lan’s brothers and sisters managed to escape by boat while her husband walked through Cambodia to Thailand. Lan, and several of her siblings stayed in Vietnam because her father needed help taking care of his properties.

Through, the hardships Lan managed to attend Saigon Science University and attained a degree in Chemistry. Later married one of her school mates. Lan, and her husband had a beautiful daughter. In 1983, Lan’s father passed away and the government took the rest of his properties. They claimed he had acquired his wealth by working with the Americans. Lan was unable to get a job even with her degree because of her father’s guilt in the eyes of the new government and also because her husband had escaped to the U.S. 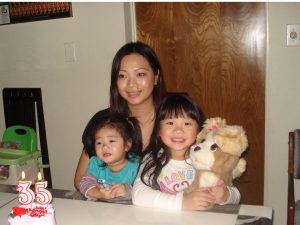 In 1990, Lan and her daughter were able to immigrate to the U.S. through the Orderly Departure Program. When she first arrived in the U.S she stayed in Atlanta, Georgia for two months with her brother. Soon, she realized she could not work things out with her husband and she and her daughter moved to California. They shared a room with her sister in San Jose. After a week, in San Jose, she started attending a beauty college for cosmetology. A year later she got her license and started to work.

When Lan first arrived she remembers she would stand in front of the microwave and observe. In the back of her head she would say, “ If people in my country could get a machine like this they would save a lot of time when they cook”.  Lan was also amazed by gigantic intersection of freeways.

While she was working at a beauty Salon, she applied financial aid to go back to school. While working as a cosmetologist she took classes at West Valley College in ESL and Chemistry major. After, she spent another four years in San Jose State and attained a degree in Chemical Engineering.

After school, she worked in Stanford Research Institute (SRI)  as a consultant from 1998 to 2001. Her division was closed during the economic crisis in 2001 and Lan was laid off. While she worked at SRI she also started her own beauty salon called Stanford Beauty Salon.  Although, she was laid off she was very glad she still had her own business. Now, during the day she works at the beauty salon and she tutors high school students in the afternoons. Throughout, all these years Lan has been an empowering women who has managed to raise a wonderful daughter and now enjoys two granddaughters.

This interview was conducted by Maria Vazquez of Thulan Ly.