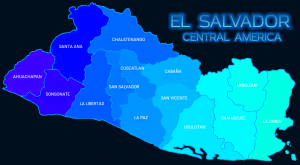 My name is Javi (name changed). I lived in a small town in the country of El Salvador named San Francisco Menendez. I was born in 1979. I used to play with friends on the soccer field and play with the marbles we had. The landscape was very rural and the air smelled like a chicken coop.

At the time when I was a teenager the Salvadoran Civil War was going on. The war had been going on since I was born in 1979 until 1992.  There was lots of violence and gangs running around the country. Going out of my house felt like an everyday gamble with my life.Even worse, hurricane Mitch was a category five and on its way to pass over the country.

There were not that many job opportunities and the government was not really doing anything about the gang crisis under president Alfredo Christiani. I knew I had to leave to have a better future. When I was twenty-two years old I knew I had to make the decision to leave.  I had to leave because I was going to live in poverty my whole life if I didn’t do anything and moving would provide a better life for my future kids. I knew I was going to miss my family very much especially because all 9 of my brothers and sisters were very close. It was going to feel like a part of my heart had left.

I had to leave my wife back there because there was only enough money for one of us to go but I was going to pay to bring her to the US later. I was very scared to leave because I didn’t know what I was going to face along the way. The journey was very dangerous.  In the morning, I got on the back of a truck and we started going towards the border. I remember having to be very discreet while walking through towns through Mexico. I almost had to act like a spy.

The air passing through Mexico smelled like delicious food and it was making me very hungry. While crossing the deserts sometimes I would starve because I had to save money for when I got to the US.  Along the way there wasn’t enough water and food for many people traveling with us.  We had to hide because immigration authorities were trying to catch us to send us back. Crossing through Mexico I remember kind people giving me some food. The journey felt like years were passing by and trying to get across was all I was doing.

After a lot of walking, we finally arrived in the US. Some of my friends that had come previously took me to where they live after picking me up in Los Angeles. After the long journey, arriving felt like I had accomplished something great. It felt like I was on top of the world.  We arrived in a town called Palo Alto.The air smelled like trees. The first day after arriving, I started to look for jobs. Eventually I found one in construction.

One of the hardest things I had to face when moving here was being alone and not having family.  Also the language gap was hard because the majority of people only spoke English. In looking for some jobs sometimes I did experience racism because they saw me as something lower than them because I’m a minority.

Today, it is still difficult but much better than I ever imagined life could be here. One of the biggest milestones I have accomplished was learning English. It took me a couple of years but I was studying very hard in an adult school in Redwood City.  I went after work at night to be taught the English language. After that me and my wife began to make our family here in the US starting with my son.

This move impacted me because it gave me more motivation to work because everyone in this country is working for the same reason.  It impacted my family because they have an opportunity to have an education which leads them to better jobs that just wouldn’t be possible in El Salvador. In the US I also have a chance at retirement but in my country retirement is not something you do because of the constant shortage of money.

If I had not migrated I would still be stuck in this cycle of poverty in my country. I could have also been killed by gangs back in my country. My family would not have been safe.

This interview and narrative were done by the subject’s son.