Fritz was hired to work for the county watering the dirt roads, particularly the logging road that carried the lumber to the port of Redwood City. That road, Woodside Road, is a major arterial road to the present day.

My grandparents Fritz and Louisa Meyer were part of the early growth and development of San Mateo County, California. They were not part of the wealthy Flood, Menzes, Crocker or Stanford families, but they did play a part in the economic and social growth of the county south of the big City of San Francisco.

In the late 1880s San Mateo County was starting to find its own identity other than as a country home for the wealthy. Towns that had grown up around stagecoach stops began to flourish. Redwood City, less than 30 miles south of San Francisco, had a port. This port on the San Francisco Bay gave access for the redwood cut in the coastal hills to be milled and shipped north to San Francisco and east to the delta and the gold country. Most roads were dirt, and horse and wagon were the main source of local transportation.

Fritz and Louise settled in a village called Woodside nestled beneath the coastal hills, about two miles west of Redwood City. They had both traveled a long way to get there. Their families were part of the wave of German immigrants who came to the USA in the mid to late 1800s. They came with their families and extended families many of whom settled in German communities in the Midwest.
Fritz, formally named Fredrick, was born in 1850 in the farming town of Oiste, Germany, about 70 miles northwest of Hanover. At the age of 18 he had been in the United States at least five years, because he applied for American citizenship in Mason County, Indiana in 1868. Two years later he is living with relatives in San Lorenzo, Alameda County, California and working as a farm worker. Seven years later on August 24,1877 he marries Louisa Bolte, born in 1854, also in Oiste, Germany. Three years after that they have settled in Woodside on the western side of the San Francisco Bay with two children – Margaret, age two years, and Henry, age six months.

Farmhouse (left) with Freida and her future husband Arthur, Hazel, and Carl.
Barn (right) and Henry.

The Meyers managed to buy a bit of land and build a house. They raised vegetables and chickens. Fritz was hired to work for the county watering the dirt roads, particularly the logging road that carried the lumber to the port of Redwood City. That road, Woodside Road, is a major arterial road to the present day. Louisa was busy raising their family. They had nine children, seven of whom lived to adulthood. They were: Margaret, b 1878; Henry, b 1879; Louise, b 1881; Augusta, b 1883; Freida, b 1885; Anna, b 1887; Matilda, b 1889; Carl, b 1891; and Hazel b 1895. Both Augusta and Matilda died a month after birth. 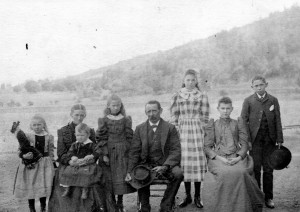 Henry never married, and was a gardener at the developing Leland Stanford Jr. University; Lou and Margaret worked as housekeepers for the affluent in San Francisco until the 1906 earthquake when they were brought home, never to work outside the home again. Margaret, Annie and Freida married and raised their families in the area. Carl, my dad, grew up and left home to live in the industrial city of South San Francisco. He worked in the booming meat industry – in the stockyards, slaughterhouses and eventually as a plant manager. Lou and Hazel never married. They lived in the family farmhouse until 1957 when it was sold to support them. 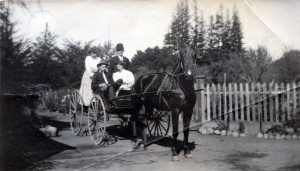 Fritz died in 1900 as a result of an accident. He was watering the county road and got kicked in the head by his horse. He was only 50 years old. There was an obituary and a small newspaper article about the accident in the local paper. Louisa died in 1903 of influx of the bowels after a brief illness. Both are buried in the historic Union Cemetery on Woodside Road in Redwood City, CA along with three of their children: the babies, Augusta and Matilda, and son Henry. The rest of the family for the most part, is buried in Colma, CA at Cypress Lawn Cemetery. 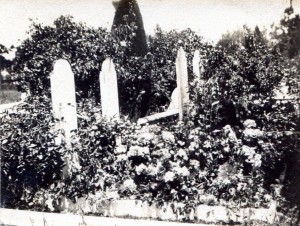 Fritz and Louisa were pioneers. They were ordinary people who contributed to the growth and viability of San Mateo County. They will not be found in the history books but they had to be tenacious and kind to have raised a wonderful family. I am still in touch with several cousins because of the value that our parents taught us about the importance of families sticking together.
There is a small obituary for my grandmother Louisa that states that she was a “devoted mother, a true Christian woman and good neighbor and admired for her many womanly virtues.” It also states that she was “well known and liked by all.” She died at age 48 leaving five adult children and two young ones, my dad Carl and his sister Hazel. Carl and Hazel were raised by their older siblings and it seems Louisa’s values of hard work and kindness were passed on to them. Values I got from my dad were about the importance of family, hospitality, never turning anyone away who needs help and doing acts of kindness without any notice to oneself. I am sure Louisa would be pleased.