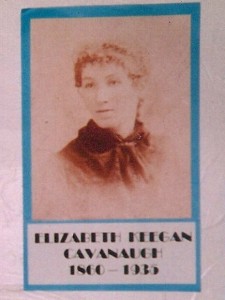 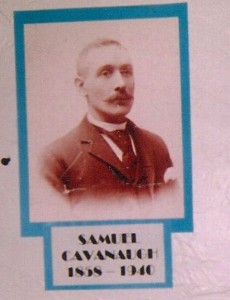 The Story of Samuel and Elizabeth Cavanaugh (Also Kavanagh: In Ireland they spelled their name with a K when they came to America they changed it to C.)

Sam went to Dublin to be the gardener at the castle on the Keegan family estate. After Liz’s father got to know Sam, he told her that Sam was the kind of man he would like her to marry.

Sam and Elizabeth fell in love and were married on 10/13/1880 in Kelmacanough, County Wicklow, Ireland. Six months after the death of Liz’s father, Sam and Liz came to America. They left from Dublin on August 15, 1881 on their delayed honeymoon.

The trip from Ireland to America was hard on Elizabeth. She got so sick that she vowed never to return to Ireland. On their way across the sea, Sam roamed around the ship learning all he could about engineering. When he arrived in America, he sold himself as an engineer.

Because Sam had a friend who lived in Detroit, Michigan, they settled in Detroit, in the part of town known as “Cork Town.” He got a job at Ben Seagel’s Engineering Company. Later, Sam found work with the city as an engineer with the Board of Education. He and Elizabeth had seven children.

Sam was very religious and walked many blocks to attend Sunday Mass. Sam was also very generous. He would give all the grandchildren a $5.00 gold piece for Christmas. In those days that was a great gift.