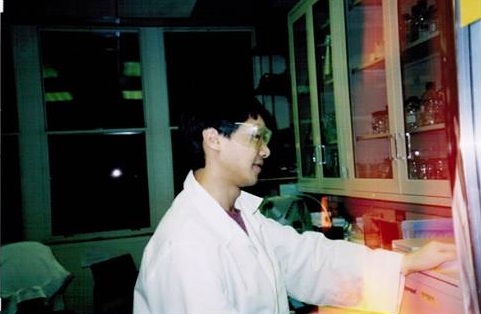 He hopped from one heat vent to another, over the ones that lay outside the school buildings. It was below zero degrees Celsius, and he had only worn a down jacket and jeans. He was freezing and needed to stay warm. Sam Chou was starting his second semester at the University of Wisconsin in the year of 1990. He wanted to check out his new classrooms and decided to hop on the bus on one Sunday afternoon to the campus. But of course, it was a Sunday afternoon and none of the classrooms were open. The bus wouldn’t come for another four hours and that was how he ended up walking five miles in the subzero degree weather home, taking refuge in the steam released from the heat vents.

Sam had recently moved to Wisconsin on a scholarship from Taiwan. It was in his sophomore year at his undergraduate school in Taiwan that he found his calling to higher education. College life in Taiwan 1987 wasn’t much but partying. He felt something was missing and decided he needed a better education than the one he currently had; he wanted to become a life scientist.

So he went to the largest library in the capital city, Taipei, and researched possible schools in America. Preparing and applying was even more difficult as a foreign student. He had to become proficient in writing, reading, and speaking English. He had to write an autobiography about himself in English. This took him three years; partially because after he graduated from undergraduate school in 1988, he was drafted to the army for two years.

But that did not stop him. What spare time he had during his time in the army, he spent studying for the TOEFL and GRE, standardized tests required for foreign graduate applicants. Come 1990, Sam found himself at the airport in Madison, Wisconsin. It shocked him to see the diversity of the crowd hustling around him. Throughout his entire life, he had been surrounded by people like him, Asian with black hair and black eyes.

Sam’s fondest memory from his time at the University of Wisconsin was on October 10, 1991. He remembered the exact date because it was the anniversary of Taiwan’s independence. He was in the university library studying well into midnight. A streetlamp outside shone its light through the large, gothic window next to Sam.

He noticed the light flickering. There was something wrong, a break in the monotonous, yet comforting pattern that he was in. He looked outside and there was snow. Beautiful, stark-white snow that contrasted with the black night blanketed the campus.

He was in awe.

He ran out of the library and jumped into the snow, whooping and hollering while the librarian laughed at him.