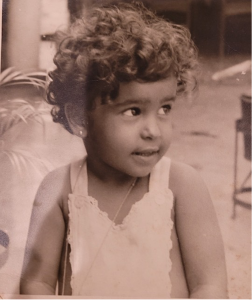 This is a story about a resilient and smart kid who loved to roller skate and her journey to making it to America as a political asylum seeker from the Castro regime in Cuba.  Beby Kells was born in 1949 in the beautiful town of Guantanamo, Cuba in the Oriente Province. She was the youngest of three, with one older brother and one older sister. Beby grew up going to the beach, having large gatherings with neighbors and family, roller skating, playing the piano, and hanging out with friends. Her Sundays were filled with trips with her Grandfather to go on adventures, taking pictures and coming home to freshly baked cakes, that her mother lovingly baked for the family every Sunday. Beby lived a life of freedom and fun, without fear until one day it all changed. In 1959 around the age of ten, Beby knew that the revolution had begun and was starting to take hold of the life she held so dear. Castro and the rebels had moved into the Sierra Maestra in her province and they were taking control of the people and the land, burning buildings, the sugar cane crops and creating warfare in the streets. Her father and grandfather were both in the military that was currently backing Batista, so her family was heavily targeted. Little things, such as taking piano lessons was no longer fun or a safe option for Beby, as she was insulted by a little girl who lived across the street to where she took her piano lessons, when she would walk to and from. There were many people who supported Castro and people were turning on neighbors, friends and political signage was only egging people on.

“There were signs in our town that said, ‘kill every single one of them, from the oldest to the youngest.’ And guess who was the youngest? That is how it all started. People did not want the government that was currently in place.”

“I can remember on my birthday, I think it was my 11th birthday and the rebels came through our house and they took everything from out of every closet, every drawer and threw it all around…they came through the house and took everything out because they thought my father was getting a group together to assault the Castro group. But Castro was already in power, and we could not leave the house, we were on house arrest.”

There Beby was, 11 years old and living under house arrest; her house was guarded by men with guns and one of her uncles had to be her bodyguard. When Beby went to school or left the house, her uncle was there. When she went to school, her parents had to tell the school the only people that can pick her up from school were either her mom or dad or her uncle. They had to do this to make sure was protected and not targeted by the rebels. At this point in time, there was gunfire and bombs going off day and night; long gone were the days of roller skating around carefree. If she heard gunfire she was taught to drop down, do not look to where the shots were coming from. Due to the fighting her school was often put on lockdown, no students could leave without their parents or a guardian picking them up. The rebels would often go to the private schools, knowing the children of military and government members went there, and would tell the nuns or principal that they were there to pick up which ever child and take them.

“One day, I remember this so vividly, the school had very large wooden doors, but then they had a tiny little wooden door, like some of the churches and somehow I was able to get out. There was so much gun powder and ammunition being fired, helicopters, shooting. So, I got out and I ran because I wanted to go home. All of a sudden I see this military jeep barreling down towards me and my uncle just picks me up, boom, and just throws me right in…The day is still so vivid in my head, I can still see the day, the part, the sun, everything… He said how dare you get out of school; you know you are not supposed to leave. But I was so scared in school, I thought they are going to bomb this place and I am going to die in here.”

Everything had changed, Beby went from a carefree child, to a rebel target. Towards the end of 1961 Beby would go around handing out pamphlets against Castro and a family friend told her father that she needed to get out of Cuba, she was now a huge target and the only way for her to stay safe was to leave. On January 12, 1962 Beby and her older brother were finally able to get Visas to leave Cuba and go to The United States. They were a part of the Peter Pan flights that carried political asylum seekers to the U.S. Before leaving, Beby did not want to go and leave her parents, friends, and her life behind. Her parents could not go with her because they would not let her father out. He was put in jail at least 15 times by the Castro regime and they struggled to get out. She remembers her parents telling her to not worry, she will only be gone for a year. However, Beby never went back to Cuba, and her biggest regret was not saying goodbye to her paternal grandparents, who she never saw again.

Once arriving in Miami, Florida, Beby and her brother, Abe, stayed with family friends who had left Cuba before them. They stayed with them for a few months until Beby and her brother were able to travel to Chicago, where one of her uncle’s had moved to in 1959. At that time in the United States, the government felt that it was inappropriate for Beby to live with her uncle, brother and now her mother’s dad since she was a girl. So, they tried to put her into foster care, like many of the other children who came to the U.S. without parents, seeking political asylum. Beby’s uncle was able to keep her out of foster care by enrolling her in a boarding school in Chicago instead. Sadly, Beby was now in a new country, a new school, away from the only family she had in America and she did not speak a word of English. Many nights were spent alone, crying, not knowing what the future would hold. Beby made her first American friend in a girl named Mary Ellen Boubniew. She was blonde, blue eyed and taught Beby things and showed her around. Mary Allen taught Beby the song “White Christmas”, they would sing it over and over again every night in the rec room.  Beby was able to quickly pick up English and in three months she was fluently speaking, had made friends and finally found a place where she could enjoy herself. 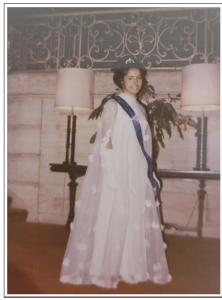 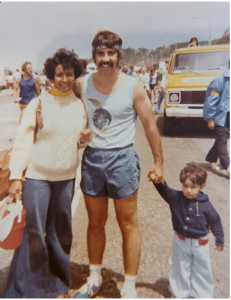 Beby found love with an Irish immigrant who came to the U.S. in 1957, named John Kells and they have been together since high school. They married April 29, 1972 and moved from Chicago, IL to Indiana, were their first son, Matthew, was born. After a few years they moved out to California and found a home in Los Altos in the bay area. Beby became a United States citizen in 1984. She had always wanted to become a citizen and she knew that she had lived in the U.S. long enough, her kids were born here, and she had always had an affinity for the U.S. Her grandmother taught English back in Cuba, and taught Spanish to the U.S. military members in Guantanamo. Beby was familiarized with America from the visitors from the base and the English radio shows her grandmother has listened to.

“Being in Guantanamo, I think it made us closer to that [American] lifestyle… it was a small town, but it was not a dirt road. It was more like Los Altos. We had great schools, theaters, everything. I do not remember not having high class stores, we even had Sears! We had many people from different countries where I lived, I had friends who were Chinese, of many different religions.”

Beby has had a long and fulfilling work life and volunteer life in the US. She studied Art History and worked for a newspaper company as an advocate, developing programs to encourage readership. Later on, she became the CFO for Aeron Clinical Lab. She also volunteered for 10 years at a Day Worker Center teaching English, and volunteered at Generation Connection Garden, connecting school age children 1st to 3rd grade with adult mentors.

Beby has been married for 49 years, and currently resides in St. Augustine, Florida. Although her roller-skating days are behind her, she still enjoys walking on the beach every day and taking lots of pictures.

The interview and narrative were done by Shannon Gessert, the daughter-in-law of Beby, and a student at Foothill College in Los Altos Hills, CA.