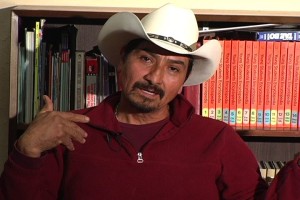 My friends started saying, you know what Roberto; we’re going to find you work. I said, okay that’s what I want. Because in my pocket I only had about 100 Mexican pesos, that was absolutely nothing here. So one of them says, you know what Roberto; I’m going to take you to the second-hand store to buy you clothes. I said, to the second? What’s the second? I said, okay that’s fine. So he took me. He bought me one pair of pants, two t-shirts – I remember that he bought me a t-shirt with an American eagle across the chest – I said, well now I’ve improved a little because I have an American eagle on my chest. The month of December, I worked for only 3-4 days.

In January, I worked on the roof, those were my first 4 days of work, where you take off the old material from the roof, that’s what they needed me to do those 4 days, but they paid me $60. So my first $60, I said, wow $60 each day, that’s great money. In December, the holidays came, Christmas time, New Years, and there was no work.  But by that time, a friend of mine got me work at a tortillería [place that makes tortillas] of some Chinese. He said, you know what Roberto, you have work now to start on January 4th. He said, we’re going to work in a tortillería.

So I noticed that the amount of money he was paying was too little. In that time, I’m talking about 1980-81; I earned $275 every two weeks. In reality, I paid $300 for rent, what did I have left? So through some other friends, they found me work at an electronics business; we made parts for airplanes, parts for computers, we made parts for cars. The $275, $270 that I earned every two weeks, in the other company I earned them in five days. So my economic situation kept improving, because I was earning more money, and I had the opportunity to send more money to my parents. I was single, and not ugly, so my situation was improving. I spent five years at the electronics business. After five years, I became a gardener. Gardening didn’t work out for me. Luckily, a man came looking for someone to work in a business about septic tanks. I started working with him; I’m talking about 20 years ago since I’ve been in this company. It’s going very well, thank God. My situation completely changed. My parents live much better. My leaving from Mexico improved my personal life,  as well as the life of the family that stayed in Mexico. It’s difficult. I just got back from Mexico, and every time I go to Mexico, I tell them that we, the immigrants, pay a very high price, very high because we leave parents, we leave siblings, we leave uncles, we leave – we, Latinos, have a very profound root with family, we see from the grandfather, to the Godfather, to the uncle, to the aunt, we even help the neighbor. Why? Because it’s the culture of Latinos, and I say Latinos because it’s not just in Mexico; we’re talking about our brothers from El Salvador, Nicaragua, Center and South America. We have the same culture, so because of that gift, that culture, that we have, we are very close to our family.

The price we pay for coming to the United States is very big, because every time we return, we go with desire to hug our mom, to hug our dad, to help the uncle who is struggling, the God-son, the neighbor if he has nothing to eat, if he has a sick one, just giving him the little that we have. So our life has changed, but I’m talking from 1980 to 2013 now, so it’s a big price, it’s a lot of time. If we begin to value the time that we’ve lived outside of our Mexico, I already have roots here in the United States, because I have my children who are born here; they don’t think the same as I do.

The don’t feel as I do. I have a heart, that’s perhaps, 100% Latino. My children here perhaps are of Latino look, of Latino face, of dark hair, but they have another feeling. They have something that we don’t know why it happens, why a son sometimes doesn’t have the emotions that the father has, or a daughter doesn’t have the emotions that the mother has. And, for example, in my case, we’re the first generation to come from our Mexico over here; we still have that root. Even though we have roots here, we have roots in Mexico, but we nurture both roots. We are in the middle, so we feed off of the American root, and the Mexican root.