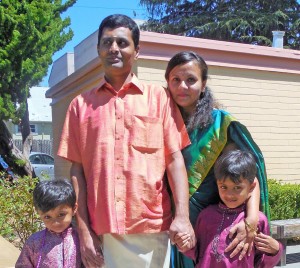 After coming here [to America] it was clear as day, I could taste it in my mouth” -Rashmita

At the young age of eight, Rashmita, moved from India all the way to Indianapolis, Indiana with her brother, mother and father. Before their big move, her mother was a stay-at-home mom, while her dad was a businessman. With the hope of better job opportunities in America, Rashmita’s parents decided to make a huge leap of faith and move to America.

Transitioning to Indiana had a big impact on Rashmita’s life, it was a complete culture shock! When I asked about how the transition was, she said, “the second I got off that plane, I felt like I became an adult”.

Life in Indianapolis was difficult because Rashmita did not speak any English. Not knowing English affected Rashmita in school. She was a third grader who knew how to read in English, but she did not know how to express herself and speak. For the first year, the school had her attend kindergarten classes as well as third grade. She struggled to learn the language and keep up with her classmates. Rashmita watched Sesame Street, and other PBS programs like Mr. Rogers to immerse herself into the English language. After about two years, she finally learned English and the academic part of the school became easier.

Yet it was still hard to make friends in school. She felt that she didn’t really fit in. “It was very difficult to figure out who I was and where I belonged, because I didn’t really belong there [Indiana]”. Like in many schools, there was a “social class”, and “if you didn’t fit into anywhere, you were kind of just hanging out alone”. After school, she had a job where she felt more accepted. Those were her favorite hours of the day.

Meanwhile when Rashmita was struggling with school, her parents had to adjust to American life as well. Rashmita’s father already knew English, but had to change his profession. The whole family learned a new culture together. Rashmita told me in our interview that her mother learned to balance the new culture, while maintaining the old.

Through tough times, Rashmita and her parents have worked hard and appreciate their gains. Although they faced many challenges, Rashmita’s family never saw it in a negative light. They understand the value and importance of family time and the money that they earn.

Rashmita continues to practice old family traditions and new ways of life. Now with two children of her own, one 5 year old and one 7 year old, her family lives with a mixture of both influences from the 80s in India, and life spent in America. Rashmita and her family do morning prayers together, and enjoy traditional Indian meals together. Rashmita always speaks to her children in her native language. One “new world” tradition the family shares is that every Friday night, is pizza night! The two children each get to pick their own show which is approved by the parents, and they get to watch a show together while eating pizza. This little family tradition allows the family to have something to look forward to, and encourages more family bonding. 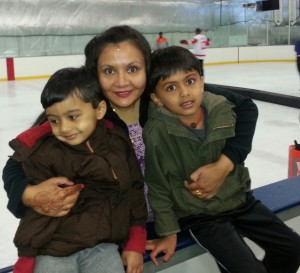 at the ice skating rink

Rashmita’s story was told to and written by Alexis Faust.