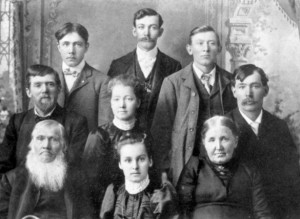 Another young woman who courageously made possible a “better life” for the family in America was Ragnild Syversdatter Groth. When her parents agreed to the request that their seventeen-year-old daughter marry Kittel Groth, who was fifteen years older, she had no idea that five years later her husband would succumb to the “America fever.” He sold the family farm in Hol-Hallingdal, Norway to a younger brother so that Kittel’s
family – which then also included two young girls – could emigrate to America.

After their fifteen-week trip by sleigh. sailboat, canal boat, and wagon, the family reached Rock Prairie, Wisconsin, in the fall of 1849. After living for eight days in a barn, they moved to a large farm where Ragnild agreed to be the housekeeper for two bachelor brothers while Kittel located land and lived that first winter in America in a hillside cellar in northern Iowa. The following spring his wife and children joined him in Clayton County, Iowa.

However, not only the young women were examples of fortitude and self-reliance. Two years later, in the fall of 1852, Kittel’s mother, Ragnild Kittelsdatter Groth, who was 62 years old, emigrated together with her 64 year old husband and the remaining family members so that “all from the old home in Norway named Groth were together here in America.”

Ragnild Syversdatter and Kittel Groth were the parents of my mother’s father.

This story was shared by Joan Buckley, a member of the Grace Lutheran Church in Palo Alto.