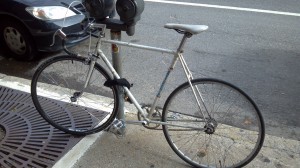 This image is not copyrighted, labeled for commercial reuse with modification.

“My story is just like anyone else’s who came to this country looking for a better life,” Rafa told me, but what followed was a heartstring tugging recapitulation of his time in California, his hopes, and his dreams, “I left my country, Mexico, after having divorced my wife. We had two kids, a boy of six and a girl of 10. My daughter was diagnosed with cancer and I could not pay for what she needed, so I came. I live a miserable life in the States, but I am blessed. Even though I have no one here, I am all alone, I think I am making progress. No, I am, because when I look back to the six years that I have been here, I was more miserable.

I cannot afford a car. Even if I could, I cannot afford gas if I want to have enough to send to my family and eat. I barely make enough money cleaning to pay for the rent of a single bedroom in someone else’s home, and I send as much as I can of my earnings back home. I’m blessed because I have a roof over my head, clothes on my back, and enough food to keep me alive. More importantly still, I have God and hope.

The first few years, I was more miserable because I had just arrived and I had no home. I missed my kids a lot and when I called to see how they were doing they would ask me for things I could not buy for them. Sometimes I would not have anywhere to sleep, no money to eat, no where to shower. No one wanted to hire someone like me, but I would tell my son and my daughter that it was beautiful here, that I would bring them soon.

I struggled to find work and to stay positive until a very kind man allowed me to clean up my appearance and let me work with him in construction. I had almost given up, but he fed me and gave me an opportunity I am eternally grateful for. It’s a lot for someone like him to trust someone like me, especially because we cannot communicate very well. We both have broken English. A few months after that, my daughter passed away and I felt like the world turned on me again. My ex-wife blamed me and I blame myself. Maybe she passed away thinking that I abandoned her. Sometimes I despair, but all I can do is pray.

I’ll come to you in six more years and instead of a bike, I will have a car. Instead of a room, I will have a house, and instead of having to do odd jobs, I will speak English well enough to be a manager of some place. People think those who do not speak their language are useless, but that’s not true. I graduated university with my diploma in literature. Of course, that’s no use because it’s not in English.”

This story was shared by Rafa F. and translated and written by Chia-Ry Chang Ureña