Profile of a South Coast Farmworker 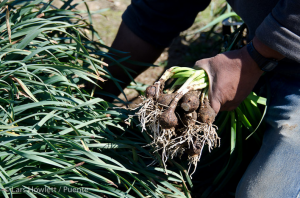 The name has been changed in this story posted by the organization, Puente.

When Pedro first arrived to the United States in 1983, he worked picking tomatoes in fields near Chula Vista, California. In those days, conditions for farmworkers were different and Pedro lived for months, along with other farmworkers, on the banks of a creek under a roof made out of a blue tarp, often in harsh weather. This was the first of many work trips to this country.

Why did he leave Mexico?
Pedro is originally from the Mexican State called Guanajuato. He saw no future in agriculture and began working sewing in a nearby town. He tried many jobs in Mexico including laying pipeline near Guatemala. When he got married he realized he couldn’t provide for his family and came back to the United States, this time near Fresno. Pedro was picking olives, oranges, and grapes, among other crops. Like many farmworkers in those years, he followed the harvest. This time, he was living in a car.

On one of his last trips, he arrived in Pescadero, California because some friends and brothers-in-law lived here. That year, he learned that an amnesty had passed and that he qualified to get a work permit. For several years he’d go to Mexico to visit his family for a few months and come back to work the rest of the year. “I was also sending money home every time I got paid. I was always very responsible with my family duties,” Pedro said.

“The life of farmworkers is the hardest job and the worst paid.”
Pedro witnessed many hardships during his life as a farmworker: farmworkers got dehydrated and simply collapsed in the fields, job sites lacked bathrooms, drinking water and rest times. One time, a girl fell from her place sleeping on a tractor from exhaustion. The tractor driver didn’t see her and she was killed.

“Things are way better now,” he comments after these remarks. Pedro mused about Cesar Chavez and his contributions to that reality. “It made me feel joyful to know that he was out there advocating for us.”

After years of farm labor, Pedro became the night shift driver for the farm where he has worked for more than 10 years. Still, he often holds second jobs. Pedro knows California’s agriculture is very important for the United States and the world but he says, “People buy produce and they have no idea about the hands that harvested it. I would like people to know how hard is to get the produce to their table.”

Pedro became a citizen about five years ago. However, he has not found a way to get legal residency for his wife, who lives here with him. “It is very depressing for her. I see her suffer, even cry, especially when there is a holiday in her native Mexico town and she cannot go and visit her family. Now, I can go and I take my daughters that were born here, but she has to stay behind every year.”

There are good things that come with the job, though, he says. “My family lives better now.” But, “I see the system as very broken… Farmers need the labor force and most U.S. citizens will not take those jobs. We need the jobs. It is a need for us so we do the job. That’s life.”

Story shared by the organization, Puente, located in Pescadero, CA.