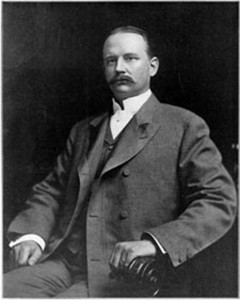 Percy Tredegar Morgan was born in London in 1862 into a distinguished family of Welsh origins. At age 21, after learning bookkeeping, auditing, and other skills, he left England for the United States to work for mining companies in Nevada, Denver and Montana. His experiences and legacy of just the first 15 years of his life in America are amazing.

Percy Morgan apparently found Montana’s brutal winters intolerable, and left about 1885 for San Francisco. His business and accounting career progressed rapidly. He was instrumental in organizing the Nevada Gypsum and Fertilizer Company, Eureka Mining Company, and the Sunset Telephone-Telegraph Company, which reorganized with Pacific Telephone & Telegraph.

By 1892 Morgan was a fixture in San Francisco’s business community. About 1893 he married Fanny Babbit Ainsworth, called “Daisy,” who hailed from an affluent Oakland family. In a few years, the Morgans bought a 100-acre property in Los Altos Hills just above today’s Foothill College. Percy Morgan joined the Pacific Union and Bohemian clubs. At the end of the 19th century his business interests included a directorship of the Union Trust Company and Wells Fargo Nevada National Bank.

Morgan and some partners formed the California Wine Association (CWA), the largest wine-producing cooperative in the world, stimulating the Napa and Sonoma wine industries. The great earthquake and fires of 1906 destroyed most of the CWA’s San Francisco wine cellars, and the CWA relocated to Richmond, California, to a site still known as Winehaven.

The information above is excerpted with slight modifications from a more complete biography at http://www.losaltoshillshistory.org/Resources/Stonebrook-Ct-manor/Life-Percy-Morgan.html