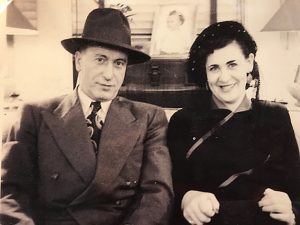 My grandmother, Fruma Dushnitzer, did not intend to become a US immigrant when she came to visit in July of 1939.  She and her 3 year old daughter Fagie, came on a ship, “The New Amsterdam”, to visit her parents in Chicago, as they had never met their granddaughter.  They had emigrated from Lithuania to Chicago in the late 1920’s.  Nachum Murik (Fruma’s father) became a chicken “shochet”, meaning he slaughtered chickens in the ritual, kosher way.  Later he and his wife Ethel started a store to sell the chickens.

The visit was supposed to be for six months and then Fruma and Fagie would return home to Kaunas, where Fruma’s husband, Shalom Zvi Rachkovsky taught in a Jewish school.  In September 1939, the Germans invaded Poland and Fruma and Fagie were stranded in Chicago.  Fruma and her husband wrote to each other regularly until September 1941.  No more letters came from Shalom.  It wasn’t until 1948 that Fruma found out what happened to Shalom.

Unfortunately, on September 11, 1941, Shalom was killed along with his parents and his sister by the Einsatzgruppen (mobile killing squads of Nazi SS and police, with some locals ).  The information was received when the Hebrew Immigrant Aid Society found a man who had survived the shootings.  The man had been wounded and was at the top of the pile of 155 Jewish bodies.  He named the victims he knew including Shalom and his family.  A plaque marks the mass grave now.

My grandmother had been working in her parents’ chicken store in Chicago – plucking feathers in the early morning.  Then she’d go to her job at Garfield’s Bakery where she served the customers. Because of her excellent command of Hebrew (in addition to the Yiddish that the family spoke), she got a job as a kindergarten teacher at a Jewish school, where she worked until her retirement.

In 1950 she married my Grandfather, Osher, who was a “shochet” of cows, working in the Chicago stockyards for Swift and Company.  Osher’s first wife had died in 1944.  Fruma and Osher were married until he died of a heart attack in 1969.  I went to a Jewish Yeshiva high school from 1966 – 1970 where I lived in the dormitory.  I’d stay with them over Sabbath every month or two.  The food my grandmother cooked was out of this world, and I was a very hungry teenager who hated the cafeteria fare at the Yeshiva.  I did not think to ask them questions about their lives at the time. 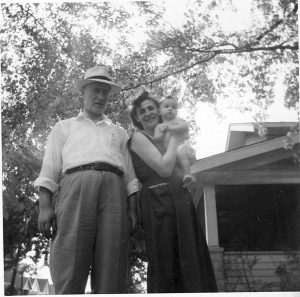 Fortunately for me I have two Aunts who provided the details written here.

This story was written by Elliot Margolies.