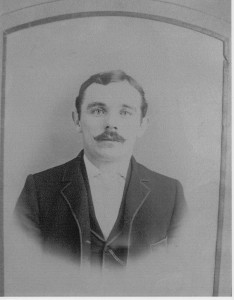 My grandfather, Morris Edmond Kraus, emigrated to America in 1881, presumably to escape conscription into the army of the Kaiser. His home was a village, Barendorf, that is near the town, Schonberg, in Saxony. He came to Ohio to live with an uncle, John Pentzel, who had arrived about 10 years earlier. Through relatives Morris obtained a job in a bakery in Springfield, Ohio where he learned that trade.

The rest of the family emigrated about 1883. This includes Great Grandpa Frantz Kraus, wife Margaret and children, Gustav, Albert, Emma, and Robert (for whom I was named).

Morris remained in the Springfield area for a number of years, bud did move about enough to meet my grandmother who was from Vandalia, Illinois. They were married in 1895 in the Lutheran Church in Covington, Ohio. After running their bakery for several years during which their daughter, Selma, and my father Francis were born, they purchased and moved to a farm near Covington. This farm was next to land Frantz had bought when he arrived.

Francis grew up on that farm and became a farmer himself. He married Ruth Young in 1920 and except for a few years lived on Grandpa’s farm where I grew up. My brother Marvin, was the first child. I was second and my sister Ellen is the youngest.

This story was shared by Palo Alto resident, Robert Kraus.