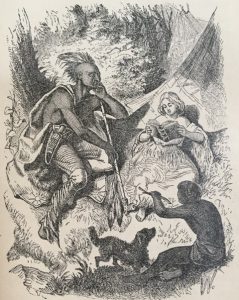 In the 17th and 18th centuries, England gave land in Ireland to Scottish people in order to bring more Protestants into Ireland, where it was predominantly Catholic. As the power of the Church of England increased, the Irish became outraged and began persecuting the immigrants from Scotland. In the early 1700’s, James Moore I immigrated to the U.S from Ireland for his protection. He settled in Chester county, Pennsylvania where he got married and had five sons and five daughters.

In 1726, James Moore II and his brother moved into the Abbs Valley, Virginia away from all the wars between the Shawnee and the Cherokee Indian tribes. James Moore became a ginseng trader. They built their houses like forts, with really thick wood walls and a steep incline leading to a small window on top to protect themselves against occasional attacks from Indians. They could shoot out from the high small windows.

One day, around sixty Shawnee warriors attacked their home. In the attack, James Moore II’s wife quickly closed the door leaving out her husband, and all but two of her children. James Moore II was killed, by seven shots as he tried to climb through the top of their home. Those inside the house survived and were taken captive. One of the captives was Marymoore’s 11-year-old namesake, Mary.

At the time they were captured, many of the warriors wanted to kill Mary, but the women of the tribe protected her, though her mother and the other captives were killed. Later, Mary was transferred for safekeeping to a different tribe, and she became a favorite of Chief Black Wolf, who she read to and who was in favor of diplomacy with the whites rather than war. She stayed with his tribe for several years. They walked from Virginia to Canada, and one night in a drunken brawl around a campfire, she was sold into slavery to a white man by another of the men in the tribe, without Chief Black Wolf’s knowledge. Later, she was rescued by one surviving brother of the Moore family, and taken back to Virginia, where she lived for the rest of her life, married a Mr. Brown, and had many children. Many Virginian Presbyterians descended from Mary Moore Brown, and “Mary Moore” became a common given name in the family in her memory.

This account is co-authored by Maria Vazquez and Marymoore Patterson who is a descendent of Mary Moore.