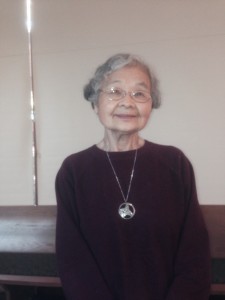 I was born and raised in Tokyo, Japan, and came to live in
the United States in 1955. My immigration status then was “spouse of an American Citizen.”

I studied English at a women’s college in Tokyo known for its excellent English studies
program, and after graduation, I worked as interpreter/translator for the occupation
personnel under General MacArthur in Tokyo in the years after Japan’s surrender in WWII.
Peter Sano, my husband-to-be who was born in the U.S., was also working in the same
office as an interpreter. He wished to return to the U.S. eventually. We got married in Tokyo
and decided to move to Palo Alto to live where his parents were living.

Three months after my arrival in California, I decided to look for a job, and found a position in the
Dean of Women’s Office at Standford University. I enjoyed my work very much. I left
the job to stay home to raise two children, and eventually I returned to work, this
time in the Palo Alto Unified School District till my retirement several years ago.