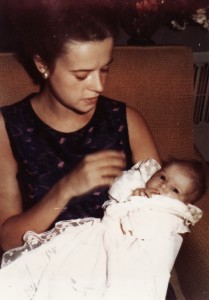 My mother immigrated to the United States from France when she was 20.
She had visited Boston two years before, with her aunt (a Parisian botanist who had won a Fulbright Scholarship), and had met my father (a Harvard College pre-med), and they had fallen in love. He came to visit her in France the next summer, and she came back to Boston with him that fall, to be married.

In Paris, she had been a sophisticated, politically outspoken law student at the prestigious Universite de la Sorbonne. In Boston, she was an immigrant who spoke only schoolgirl English, who was unemployed, pregnant, and newly wed. In addition, my father was now a medical student at Harvard, and worked and studied for long hours. My mother tended their apartment in the only place close to the medical school that they could afford – a very down-at-heel walk-up in Roxbury (a poor city neighborhood). She quickly got jobs – first as a waitress, then as a French teacher at a nearby school. She also quickly became a parent – at the age of 21. I know this was a lonely and difficult time for her, even though she and my father loved each other very much. Stories from that time are full of the linguistic mistakes she made, and of her cultural faux-pas.

Nor was her time as a single parent in a strange land yet done. My father was drafted to Vietnam after my little brother was born, and my mother spent a year on her own, with two children (we were 5 and 1), renting a house in East Palo Alto (another poor neighborhood) and holding down a series of odd jobs, to supplement my father’s meager Army pay.

Half a century later, she has done incredible things. She got a PhD in French language and literature, from Stanford (after they moved to California for my father’s surgical residency). She then attended and completed law school in Baltimore (when they moved there for my father’s career), and passed the bar in Maryland AND New York (where they finally settled, for the last years of my father’s surgical career). She is retired, but still very active, volunteering regularly for Planned Parenthood, and travelling frequently with my father, all over the world.

I am proud of her incredible grit, and grateful for the things I got from her: my French heritage, my ability to speak French, and my belief in one’s ability to leave the place where one was born, and start a brand-new life.