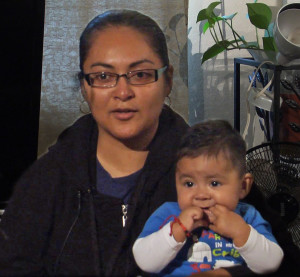 My name is Maria Hernandez. Hernandez is my marriage name. My maiden name from my hometown is Castañeda. I’m from Las Varas, Nayarit México. This is my youngest child. I have two other ones. I’m 36 years old.  My favorite food is Ceviche because of my state….. it’s a coastal state. I honestly feel proud of having come here because, thanks to this country, my son is alive. (sobs) Because he had an operation. He was in intensive care.

But now let me go back. My nostalgia of leaving Nayarit is because I lived a very beautiful childhood in Nayarit with my siblings, with my parents, with everyone. I had a very beautiful infancy as a girl. Like one of my peers said, in my México I had a better life than here in that regard. My parents were very good with me and with everyone.

They let us work, they let us play, they let us study. They let us be free. Free to a certain extent. Not freedom in the sense of “anything goes”, because “anything goes” is deviating from the right path and freedom means letting you go somewhere and you behaving well. My parents gave us the trust to let us have fun, but there came a point when my siblings migrated here. I have four older brothers. The first one came, got married, had children, and he invited me to come and take care of his children. I told him yes, because I wanted to know the country. But once I came from Nayarit to Tijuana, like everyone we looked for a Coyote to cross the border.

We found one, he sold me to another one, the other sold me to another one, until I found a woman, a coyota who sympathized with me and crossed me. But before her, the ones who would buy me from others,  crossed me through the line and I got caught. I was locked up (in Mexico). I spent three days, not in a jail.  It was in a hotel because they were going to deport me. They took all my fingerprints. In this country (Mexico) I am deported (forbidden to enter the U.S.). They told me for five years, but well I didn’t respect (that), I’ve now been here for thirteen years.

When I was locked up. My brothers didn’t know about my whereabouts, until they finally let me make a phone call to my brothers, and I told them where I was.

They told me go back, you can’t risk that anymore. But I said no, I wanted to be with them, I wanted to know the country. And I jumped the fence again and here I am. Here I am and after five years I met my husband, I got married, my first daughter who is nine years old was born, and then the next, and then this one who has given me the most worries. But thanks to God, it’s the good thing about this country, that it helped me so that my son would survive, and I’m very thankful. That’s why I say that I don’t regret coming, because thanks to this country I’m here with my son alive. That’s all.