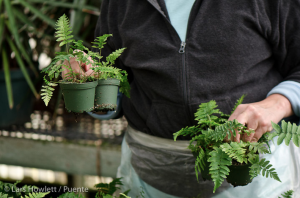 Maria and Juan are two people who work for a local nursery. “We do it all: weeding, picking, making flower bouquets,” she said. They have worked for the same farm for twenty years now. She explained, “If you work here you pay less rent. Other people in town pay a lot more for houses that are in really bad condition.” Monthly rent for a trailer in Pescadero, for example, can run up to $1,000.

Back in Mexico, 3 months after Maria and Juan got married, Juan left their home in the state of Jalisco to come and work in California. A few years later, Maria joined him. Juan eventually received his work permit through the amnesty, but he didn’t want to get legal documents for her, a reality faced by many undocumented women with controlling husbands.  “I was upset about it and I often told him, ‘I need to see my family!’” Four times, though, Juan chose to pay a coyote to take his wife across the border illegally rather than applying for a green card for her. One year, it took her a month to cross. Only then did he agree to seek the green card.

Their entire household depends on agriculture. Maria herself remembers not having food, her mother abandoning her when she was young. Today, when her children ask for something, she finds a way to get it for them. “I know I need to be a good mother and choose when to give and when not, but it is so sad when you don’t have anything,” she spoke, through tears. She has been working since she was 8 years old.

Still Juan and Maria have worked hard to guide their daughter into a four-year university. “To be honest,” Maria said, “everything she has in college right now, she has earned all by herself.” Her daughter has a full ride because of her excellent grades and Maria is proud as well as deeply thankful she doesn’t have to find the money. “We couldn’t,” she believed. Yet her value of education is absolute. When asked about what she would like other people to know about being a farmworker, she said, “I would like to tell youth to study because the work in the field is very hard.”

Hard as it may be, in general, Maria enjoys her work– though she fears the winter, as she is required to work outside regardless of the weather, like so many others. She is grateful to have a job, but what she hardly ever feels is appreciated. “No one ever says ‘thank you,’ not even ‘good morning.’ I feel humiliated sometimes because people don’t see the work we do. I would like respect for our work because we do the work Americans won’t do.”

This story was shared by the organization, Puente, a community resource center in Pescadero, CA. (names were changed)