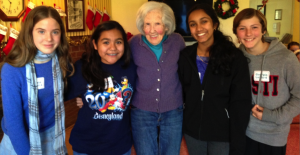 Maral Haddeland lived in Quebec, Canada, outside Montreal. She lived with her mother and father, two brothers, and one sister. Her family owned a dairy farm and sold milk from their 50 cows. Her dad was a farmer and worked with the hired workmen to keep the farm going, though everybody pitched in with helping on the farm. Maral’s family was English, though she and her siblings learned French at school and sometimes spoke it at home. Even though people sometimes laughed at her French, Maral loved speaking the language.

Maral’s favorite brother was her older brother, Allen. Sometimes they would ice skate together on the creek near their house when it overflowed and froze. Allen taught Maral how to ice skate when she was 13. She wished she had white ice skates, but got Allen’s hand-me-down black skates. Maral remembers winters in Quebec to be extremely cold with lots of snow. She loved ice skating and growing up with Allen on the farm.

The school she attended was a small four-room school where she learned until seventh grade. After that, Maral went to an all girls’ high school, Montreal High, which was much larger than the school she previously attended. At the beginning, she felt out of place because she was a shy “country girl.” The first few years were difficult and often she would come home after school and cry. However, she enjoyed continuing her education in French; it was her favorite subject. Another fun memory Maral had from high school was secretly putting on lipstick underneath her desk with the other girls before passing the boys (who shared the campus with the girls) at lunch time.

Maral went through a year of training to become a teacher. She enjoyed teaching and taught grades 5, 6, and 7 all at different times. She began teaching in a little country school and got to know the kids well, making new good friends there. She continued teaching and enjoyed it very much.

Maral had seen many exchange students on annual visits from America in the summer. In Montreal, at that time, most Americans were presumed to be rich. Maral, however didn’t believe the stories that all Americans were rich as she felt stereotypes were a first assumption and often proved wrong. Her intuition soon manifested to be true, as she would later find the virtues of living in the United States. In her life, as often as possible Maral tries to learn new things especially new languages to connect with people around the world because she thinks it widens people’s perspectives and gives them value.

The interview with Maral took place at Stevenson House in Palo Alto and was conducted by Castilleja School students, Esveide Gonzalez, Georgia Lewis, Sofia Jones, Robin Sandell, and Sreya Guha. Below are art pieces inspired by their interview. 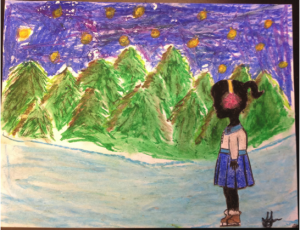 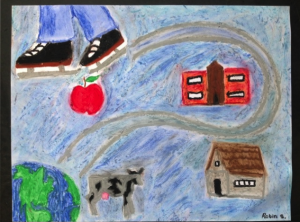 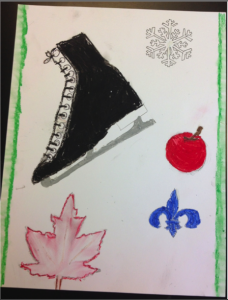 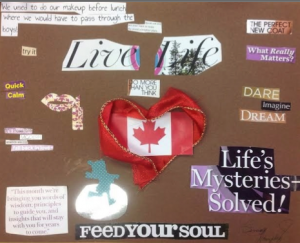