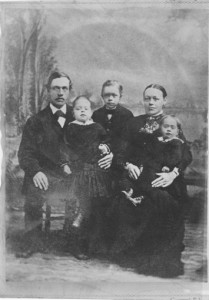 My great-grandmother with her husband and three children. (Probably taken in Sweden just before they left for the US.)

My great grandmother Maja Greta Andersdotter may have immigrated from Sweden to the US twice. She was born in Grevbak, Skaraborg, Sweden on Dec. 13, 1847, to Anders Johansson and Maria Svensdotter. She was the eldest of what eventually were six children in the family, including one who died in infancy. In the early 1850s the family was influenced by Mormon missionaries who had come to Sweden from Utah to join their LDS mission church. According to Swedish records, the family all left Sweden in 1868 for “North America.” Maja Greta was 20, her brother Johan 17, sisters Sofia 14, Caroline 8 and Christina 4. They borrowed money from the Perpetual Immigration Fund of the LDS Church and headed for Grantsville, Tooele County, Utah. Now things get a little murky. I’ve never found ship records or other travel documents for any of the family.

Within a month of arriving in Utah in Sept. 1868, Maja Greta’s father and two youngest sisters were dead, probably of cholera, according to descendants of her sister Sofia. Their family lore says the two sisters Maja Greta and Sofia did not make the journey all the way to Utah with the parents and other children, but worked somewhere in Sweden or the Eastern US. I’ve not been able to find a trace of them. By 1870 Sofia was in Utah with her mother and brother but Maja Greta appears again in the Swedish church records for her hometown in 1871 coming back “from North America”. And she moves onto the farm where Anders Gustave Johanssen lives with his parents and siblings. A marriage takes place in 1873, and Anders and Maja Greta move from their village to Linköping, Sweden to work as “laborers.” Eight years and three children later, the Swedish records show the family leaving once more for “North America,” this time to Duluth Minnesota, where they settled and my grandfather was born in 1882.

Her children all had the same initials: August Leander, Anna Louisa, Augusta Lucia and Albert Leonard. What prompted that bit of whimsy? Maja Greta’s life in the US was filled with tragedy. Her son August died in 1901 at age 25 from tuberculosis, leaving a wife and 2 daughters. Her husband was killed in a logging accident in 1905. In 1909 her daughter Anna died of typhoid shortly after giving birth to her sixth child and she took over care of the children. She died in 1922.

So I have dates and entries in church books but many unanswered questions. My mother, born in 1911, knew her grandmother Maja Greta as a child, but didn’t get much attention because Maja Greta was busy raising her orphaned grandchildren. Their father had never recovered from his wife’s death and took his own life. Did she ever contact her mother and sister, who were by then living in Idaho? And was she really in the US between 1868 and 1871? Did she go back to Sweden because she had left a boyfriend behind? Maybe her Mormon parents didn’t approve of him when the whole family was living there.

This story was shared by Mary Ashley, a member of Palo Alto’s Grace Lutheran Church.