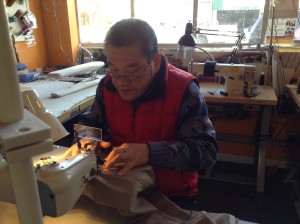 Q: Where did he come from?

Q: What was his family background before he came to the US?

A: He was born into a family of five children as the second-youngest. His father worked from seven to five or six and received a very small salary for his hard work. Because traveling fare was expensive, he walked to and back from work every single day. His mother would cook for the family and she made scarves for some money from the government. She required her children to assist her in scarf making before they went to school and after they came back from school. Because Long De grew up during the Cultural Revolution in China, he received the equivalent of a middle school education by the age of seventeen. He was unable to move onto higher education because the all the high schools and colleges in China had been closed down. When his three older siblings each finished their education, they were sent off to the countryside by the Chinese government to cultivate the fields. Because three of his siblings had already worked on farms, he was spared from working on the countryside and instead took on a job in the city of Shanghai.

Q: What did he do in his country of origin?

A: He worked as a tailor. He initially wanted to go into the jade industry, but the Chinese government decided that he would enter the tailoring industry. He later pursued jobs in the tailoring and textile industry because of the education in these trades that he’d been forced to have.

Q: When did he come to the US?

Q: Why did he leave his country of origin?

A: In the early 1960s, the Chinese government made some ineffective and unbeneficial policies and there seemed to be a drought of sorts going on in Shanghai at the time. The policies that the Chinese government passed eventually led to landowners lying about how much food and rice they could yield from their patties. Because they boasted and lied about the number they could produce, the food was quickly taken away from the peasants. Also because the relations between Soviet Russia and China at the time were tense and unsatisfactory due to the large amount of debt China owed to Soviet Russia. In order to pay off this debt, China sold their rice to Soviet Russia, leaving no money or food for the lower class Chinese citizens. Because of these events, several farmers starved to death and the consumers were faced with a smaller working agricultural force that couldn’t provide enough food for both the people of China and the Soviets. This eventually affected Long De’s lifestyle to the point in which he suffered as a child and there wasn’t always food present at his table. Neither was there any clothing for him to wear. After growing up under these harsh circumstances, he thought, ‘now that I’m grown up, I don’t want my own children to endure the same hardships as I have—without sufficient clothing or food’.

Q: Where did he start out in the U.S?

A: He started in San Francisco.

Q: What kind of work did he find?

A: When he first started, he worked in resturants because he didn’t know English. He was only able to work in the kitchen in Chinese restaurants. Although he took adult classes to learn English, his busy working schedule made it difficult for him to attend his classes on a regular basis, so he often studied English in disconnected periods of time. Eventually, after he learned enough English, he began searching for jobs where he would be able to work as a tailor, the occupation he held before he left China. First, he found a sewing company in San Francisco and worked there for half a year before finding a job where he was required to do custom tailoring. After two years in this job, his company closed and then he headed off to San Mateo to sew in a uniform making company. After working for six years, he began working for Bloomingdales and Barcelino. After ten years of working there, he broke off and started his own business, where he now runs a successful dry cleaning and alterations shop.

Q: Are there any particular experiences or memories about those early years in the U.S. that left an impression?

A: He remembered that it was very difficult to find a job without knowing English. Even when he went to Cantonese restaurants to find work, he was turned away because they believed that he didn’t know “Chinese”, which in this case would be Cantonese as opposed to Mandarin.

Q: Did coming to the U.S.A seem worth the struggles he had to face as an immigrant?

A: He feels that it was worth it in the end because if he had never come to the US, he would have never been introduced to Christianity and taken Jesus Christ as his savior. Also, he learned how to become a good citizen and overall a better person by coming to the U.S. He feels that in the end, despite all the difficulties he had to overcome as a non-native English speaker, coming to the U.S. was a good choice.

This interview was conducted by Ada Gao.