Letting Go of the Philippines 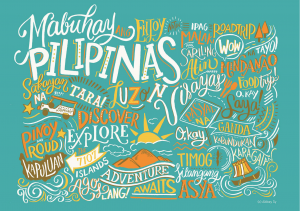 “My life was better.” My mother described her former life in the Philippines, reminiscing in all of the old memories she had of her childhood and young adulthood.

My mother was born in 1980 and grew up in the crowded and vibrant city of Cavite in the Philippines. In this city, she lived a standard yet fun and easy-going life with her two parents and her younger brother and sister. On weekdays, she would wake up to eat all of her favorite filipino breakfast foods that her mother always cooked and prepared for her. In fact, she loved her mother’s cooking so much that she would walk back to her house to eat more of it for lunch during her day at Infant Jesus Academy, which was the private school that she attended. Knowing that her mother had cooked her a surprise every single school day had put a huge smile on her face each time she came over. After school, she would reserve the rest of her day to doing her homework. However, much like the rest of us, she had the most fun on weekends. On Saturdays, she would tune in to all of her favorite morning cartoons and play outside in the streets with her friends who were always nearby. She would play many exciting games with them in the warm, sunny air and would look around in astonishment when the street lights turned on once the sun began to set over the bright orange horizon. Sundays were less fun but still very meaningful to her, for she would reserve that time to finishing up her weekend homework and going to church with her family, and pray with the rosary. She soon grew into her young adulthood without much change to her wonderful life, except a miniscule sense of maturity.

However, a great change did come to her life when she was seventeen, and it was a change she would never feel ready for. Due to the fact that her father had fought bravely in World War II, he was already considered an American citizen. This gave his wife and the rest of his family the chance to become American citizens themselves if they moved to America before my mother had turned 18. So, in the year 1997, his wife made the decision for the whole family to move to America. She immediately started packing all of her belongings and everything in the house that she found important to keep. Meanwhile, my mother was busy packing nothing more than a mere selection of her favorite clothes in her suitcase, for she had no idea that she was moving to an entirely different country and only thought that they were visiting for a short vacation. Nevertheless, they took their flight to America and arrived in Gregory, Chicago. Her family settled into a small apartment together, and it wasn’t until a few weeks of staying in this new place that my mother realized that she was going to be staying in America for good. Of course this took her by surprise at first, but she soon became optimistic about her new life because people have told her before that life is better in America. Her optimism, however, did not stop her from feeling unhappy about the fact that she did not get to say a proper goodbye to all of the Filipino friends and family members that she had spent most of her life with and held so close to her heart.

Fortunately, as a few months went by, being in America became easier than my mother thought it would be. In fact, she took this as an opportunity to embrace all of the new things that surrounded her. Whenever her family drove to Downtown Chicago, she would walk with them in the cool wintery air and try many new foods and shop at places she had never even heard of before. In contrast to how she used to have fun playing outside in the Philippines, she had also found new ways to have fun outside in Chicago with all the never before seen snow that would fall slowly before her very eyes. She played in snow piled up on the grass and even opened her mouth towards they cloudy gray skies to try and catch some snowflakes. Aside from the attributes that came with the new weather, she also became interested in MTV and T.V in general as a result of the many new channels that were easily accessible to her. She had also learned responsibility over a short amount of time. She eventually had to get used to doing chores, which very much took her by surprise since she never had chores in the Philippines. Having her parents make her feel responsible for doing her own laundry or washing the dishes was a completely new notion to her. Nevertheless, she learned how to handle all of these tasks on her own. After experiencing all of this for the first time, she also began to take notice in all of the significant differences between the Philippines and the country she was living in now. From the importance of working for what you need, to no longer needing to pray with a rosary at church, to the weather. Even though she was seeing so many new things and learning so much from living in America, she still found that she could never fully enjoy any it because she didn’t have her friends and the rest of her family to experience it by her side as well.

Moving on from her former life in the Philippines became easier as she got used to living a normal life in America. As she began going to college in Chicago, she had her first official milestone working at her local Walgreens. While she was very foreign from all her other co-workers, she still managed to make friends with almost every one of them. Meanwhile, as she attended school, she noticed that it was way easier than her previous private schooling. Since she already knew how to speak english from the english learning schools that she attended in the Philippines, she had no problem understanding any of her teachers. She also appreciated how the teachers would tell her all the answers from the textbook whenever she had a problem while in the Philippines, she had to go to the library and find the answers by looking through a variety of books on her own. Then, when the time came for my mother’s third year of college, she said goodbye to her parents and moved to Bolingbrook, IL where she attended Northeastern Illinois University and met my father. After becoming friends with him through a roommate who knew him, the two of them became quick friends and eventually started dating each other. Following this event, unfortunately, my mother dropped out of college during the second semester of her junior year due to her inability to pay for it any longer. She eventually started earning money by working at several banks across the suburbs of Bolingbrook. Along with that, she soon had her first child in 2000 and married my father a year later. Afterwards, they became lucky enough to afford a nice large house in a kind neighborhood and have their second child in the year 2002.

It took my mother eight years to feel like she had successfully cultivated her own life with a family of her own. However, even after everything that had happened to her at that point, she still had this longing feeling inside of her that still missed aspects of her old life in the Philippines and all the good people she never had a chance to completely let go of. This is when she decided to fly back to the Philippines to visit. When she arrived, she looked around and realized that everyone had moved on and the City of Cavite was truly no longer the same as she remembered it. That was the moment where she finally felt ready to let go of everything she was holding onto in her life prior to immigration and start becoming fully satisfied with the life she made for herself in America. She realized that all throughout her journey of immigration, she lost her sense of home in exchange for new experiences that could never really replace the joy of her old life. But she did get something better in return. Now, she lives in Palo Alto and has a family with “very well educated” children, which she is very proud of. Even if she had stayed in the Philippines, she is certain that she would have been able to cultivate a similar life, but she would not want to have it with another family other than the one that she has now. Her job and her family are what caused her to have the amazing life that she has today and it is something that she would not trade for the world.

This story was written by Alyssa Sievert, the daughter of Mary Jo Sievert, after interviewing her mother.  Alyssa is a student at Palo Alto High School.