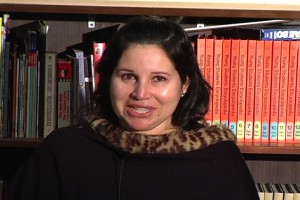 My name is Leticia Rios. I’m married. I’m from Mexico. I have five kids. When I came to the United States, it was very hard for me. Before coming here, my husband came first. When we had an earthquake in Mexico, and money was devalued, my husband was without a job. He used to work on construction, and a lot of people were left without employment. It was very difficult, and one day he…
Sorry- it’s difficult. (she is crying)
One day he told me that he was going to come here. We had three girls. My third girl didn’t even go to preschool yet. He decided to come over here and left us. It was very difficult because we had never been apart. My girls would cry a lot, and at nights I missed him so much, and we cried, the four of us together. They would tell me that they wanted their daddy. He promised me that he was going to come only for six months. He said, I’m going to pay what I owe to the bank and I’m going to come back with you. So he came over here, my brother looked for work for him, some of my family, some of my brothers were here. My brother helped him find work, and he quickly started working at a restaurant. And yes, he started sending money. We quickly paid off what we owed. When the 6 months went by, I told him come back already because your daughters and I need you. He said no, that he was going to keep working here to keep sending us so they could keep studying. But it was very difficult because we felt alone. We lived in Guadalajara, and my parents in Michoacan. On vacations, we would go with my parents on all vacations.

I told him to take us with him. But he said no, it’s very difficult here to bring your family, and he came again. And once again he left us alone. He came again, and he returned again in 2 years. He decided that he couldn’t stay in Mexico anymore. The second time he went, we were very distanced already. I told him to bring us here, or we were going to get a divorce.

When he saw that we were becoming distant, and I told him that I wanted a divorce if he wasn’t going to go over there, he decided to bring us over here. It was very difficult because I found something different. I missed Mexico because I missed the food, I missed my house. One thing that I always told my husband is that I missed my pillow. My daughters also missed their friends a lot. They left school. I left- my dad lives here, but I had never been apart from my mom.

I missed her a lot. I missed my sisters a lot. They would say, every time we get together, there’s a huge emptiness. The girls started to go to school, very difficult, they found the barrier of English. They didn’t understand. I also found it very difficult to find a job. I would say, if I don’t speak English then… the food as well. Everything was so different.

When I got pulled over by police- I had to work and take the kids to school- and the police stopped me and took my truck away. The two younger kids,  They were born here. They were little when police pulled me over and took my truck away. He asked me for a license. He asked me if I had a U.S. ID and I said no. So they told me, why are you driving if you don’t have a license? I told him, I’m driving because I’m going to work, because I go to adult school, because I want to learn English, and I take my children to school. He said, I have to take it away, and he took it away. The kids were crying. I didn’t have a cellphone, I didn’t have anyone to call, anyone to go for me.

But a woman was going by. It was at a gas station, and the woman was going to the store at the gas station, and she told me, I’ll let you borrow my phone. I called my sister, you know what, police pulled me over. The tow truck is taking my truck, the kids are crying, and what am I going to do? She said, I’ll ask permission at my job and I’ll pick you up. She was the one who picked me up. It’s been very difficult. Sometimes I would tell my husband, you know what, let’s go back to Mexico already. Sometimes we feel like- you go out to buy something and they ask you, do you have an ID, do you have a license? And they stare at you, as if they are saying, then what are you doing here? But time went by…

I miss Mexico, my roots, my grandmother passed away already. Two of my uncles also passed away and I couldn’t see them. My grandma left with the desire to see us once again, and we couldn’t see her when she passed away, she passed away two years ago. But slowly I’m also saying, now my daughters go to school here, now I work here, now I’m with my husband here. I learned to love and respect this country. I see what they do for us. I see how the police take care of this city so that it’s calm. I hear in the news what happens, for example, in big cities like San Francisco and Oakland. I thank God. I say, we’re in heaven, because since it’s a small town, the police have things more under control. I’ve learned that if you have an emergency, you call police, you call the firefighters, in a few minutes they’re with you. They’re there to help and support you. Before, after I got pulled over, I felt angry. I had resentment against police when I saw them.

I had never heard about this organization PIA. I saw what they work for, they work for the community and its needs; for example, us the immigrants. They invited me and I said, okay I’m willing to help. What can I do? What will I do? They explained to me what they do. They gather, the create leaders. Now I’m a PIA volunteer.

Since that happened to me, I saw how they would stop others and take their cars away. So two years ago, I became involved in the organization. We worked on the car impoundments, it’s how I met the people at city hall. I met with the chief of police and we spoke about the impoundment of cars. Thank God, it was a team effort, it’s not just two or three people, there’s a big team, like PICO and other congregations as well. That filled me with pride, to see that other people who are not Latino, who are elderly, who speak other languages, are supporting us. So I said, if we are Latino, and we want immigration reform, we want licenses, why don’t we work on it?

Where I work, it’s good for me because I practice English more. I’m the only Latina there, they’re Asian, and I like it because I learn more English; I practice more. I want to keep going because just like I love Mexico, now I love this country. To police now I don’t have anger, I have respect. To the councilmembers, I also thank because they’re always listened to us.