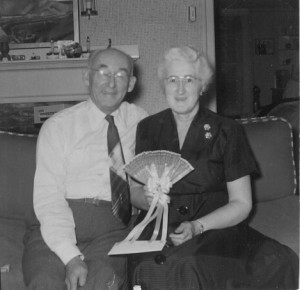 (Editor’s Note: Many folks have only the sketchiest of details about their family’s immigration to the U.S. The following account captures “the missing years” through a creative, entertaining perspective imagined through the mind of a descendent who in turn is imagined by an even later descendent – the author of this account.)

Rudolph Lupien sharpens his pencils methodically, as though a single blunt point might ruin the whole operation. “I like the fountain pens better,” he thinks to himself. “All it takes is three or four of these and an inkwell to give you all the stroke widths you need.” It’s 1935, and the economy has yet to recover for Rudy and his wife Dorothy. In their little Massachusetts town, the only steady work for him has been tending bar. His friend and neighbor Al Porter was hired for WPA work on the Sagamore Bridge, which helped him and his wife Vera come up with the down payment on their house in West Bridgewater. Rudy and Dot had found a more cautious route into their own house in the same neighborhood. For him, acrophobia and a weak constitution ruled out the death-defying high jinx of suspension bridge construction. Rudy doesn’t know yet that the Sagamore bridge will pave his path to the cottage on Cape Cod where he will eventually spend his retirement years.

Rudy is an impish man, a jester character who loves practical jokes, offbeat humor, and the occasional flip of your bread out of your hand onto the plate. It was his artistic temperament that motivated his response to that magazine ad for a correspondence course in cartooning. Times were still pretty tough at the Lupien household, but it was surprisingly easy to make the necessary sacrifices to scrape together a few dollars for the materials. Political cartoons hold a strange fascination for Rudy, at least in part because of his experiences with the bosses in his life, who provide him with an opportunity to start looking for his next job on a regular basis. Rudy begins his first assignment on the same afternoon the instruction booklet arrives in the mail, while Dot helps their eight-year-old daughter June try on a new outfit.

The figure that appears in his first sketch is the spitting image of John David Rockefeller, a caricature of the American ruling class that has been well known since the character first appeared in 1840s melodramas. The Drunkard—a staple of the American theatre to this day—features a mustachioed villain whose every entrance is greeted by a hail of popcorn, peanut shells, and hearty jeers from the audience. The rest of the cast is also familiar—a frail mother living with her sweet young daughter in a cottage on the brink of foreclosure, and a heroic young man who delights the audience by deftly hoisting the landlord to his shoulders and tossing him to the boards in a modified propeller throw. Rudy is familiar with the regular appearances of this iconic figure in the cartoon art of the left, lampooning ruling class excess for an American public with little love left for those who light their cigars with hundred dollar bills. The board game Monopoly immortalizes the same villain in the form of a portly capitalist in a black tux and top hat who won’t hesitate to leverage his property to buy yours out from under you.

In Rudy’s sketch, a group of tux-clad bankers in black are speculating with other people’s money while most of America is struggling with bread for the day. As he fills a top hat with sturdy black strokes, a family story drifts into memory. Rudy’s French Canadian father used to tell him that his family went back to the French Revolution—to ancestors named LeBaron who fled the guillotine, settled in Quebec, and changed their name to Lupien. Lifting pen from paper, his mind wanders off into a daydream about what these ancestors might have been like.

“The LeBaron family must have been the bosses back then,” he muses, his pen suspended in mid air. “They were the ones holding the whip. They probably dealt with uppity serfs who didn’t know their place the same way bosses hire cops and security men to beat on union people. How did they see the revolution coming early enough to get out of the country and escape the guillotine? Did they bring anything with them—coins, jewelry, other valuables? How did they hide what they had during the long voyage across the Atlantic? What kind of business did they set up for themselves when they got here? Or did they barely make it out of the country and start over with nothing?”

Rudy dips his pen in the inkwell with a sense of regret about how sketchy the family stories are. Realizing that his ancestors will probably remain a mystery, he finishes filling in his top hat just as Dottie calls him for dinner. His first assignment nearly complete, he sits down to hamburger, turnips, and potatoes.