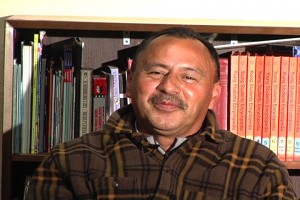 My name is Jose DeRenteria and my story begins like this. My father was a farmworker; at the time it was called Bracero. When he returned to Mexico after being here as a Bracero, we were a lot of family; lots of brothers and sisters. He was living in Mexico City with my mother and his children, including myself. There came a day when I was 12 or 13 when he told me, son the day that you leave home, go to the north, they’re going to treat you well. I forgot about that. I got married in Mexico, and then I thought I remembered those words that my dad used to tell me; go to the north, go to the United States, you’re going to have a better life.

Okay, I say well, I’m going to try it. I came to the United States, and like everyone, we come to suffer a bit, but always with the hope of finding a job. That is what we immigrants come for, to work. We all come to work, but some of us forget the purpose for which we are here. Money sometimes makes us take other routes here in the U.S. Well in the time that I arrived in the U.S. the migra [immigration enforcement] existed, but there was not a lot of hate against immigrants. It was a bad luck day when the migra could catch you, but everything was normal.

American people treated you well. In that time there not a lot of hate. There were enough jobs, of course in the fields, and also in the city. Then one day I decided to move to the city, because I was in the fields. I said “well let me try it in the city.”  I went to San Francisco but it was too cold. I said “that’s not my weather, I’m going to go back to Mexico.” On the bus a person told me; “get off in San Jose, you’re going to find a very beautiful life.” I got off in San Jose, California.

San Jose, California was my first home here in the United States. It was very good because, like I’m telling you, all the people… the police took care of us. People who were drinking, they would take them home, they would treat them well. All immigrant people were well-received.

Now with time, everything has changed. The laws have changed. The hatred against immigrant people is bigger. But I think it’s getting to a level on which everyone sees us with kindness; that we are welcomed. So long as we respect the rules of this country, and that we serve this great nation. We come to work. I’ve never had any problems because I dedicate myself to working, to eating well, to dressing well, to helping my family in Mexico. None of my siblings followed me, but I feel very satisfied to be in this country, and be able to help my people in Mexico. I hope that this year the purpose we’re doing can be achieved; immigration reform with a pathway to citizenship.

There’s a lot of sadness. My children stayed in Mexico; my wife as well. I haven’t seen them in many years. It’s a huge sacrifice we’re making being here, but the support that the family in Mexico has is important;  that we can contribute a little bit so they can grow (well) like any other person. The most important thing is for family to always be united.  It doesn’t matter how far away we are, because the further we are, I think, the more they love us. I’m very happy. I feel a bit of nostalgia not having my father, my siblings, but speaking with them over the phone brings peace to my heart and everything is very well. Thank you.