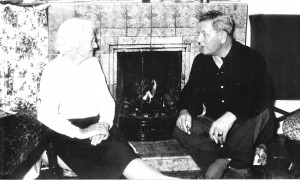 My mother, Isobel, was born in 1891 in Inverness, Scotland and immigrated to Utica, NY in 1920. My father, Arthur Cobb, was born in Brechin, Scotland, in 1890, and in 1920 he came to Utica, NY. His mother had already immigrated to Clinton, New York, where she worked as a housekeeper. Isobel and Arthur met through the Scottish club in Utica. Arthur started out as a butcher. With inherited money, he and a brother bought an industrial laundry. Arthur also served on the draft board during World War II. Because the laundry was involved in the war effort, my brother got a deferment which he did not want. But later he was accepted into the army and served overseas.

This account was shared by Marion MacGillivray, a member of the Palo Alto First Presbyterian Church.