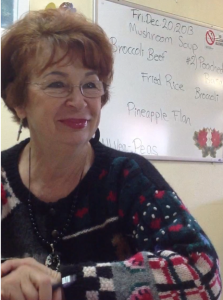 Irina is a Russian immigrant who made the move from Moscow to Atlanta, Georgia to California starting in 2006.
Irina had a good childhood. She was born in Moscow, Russia and was an only child. She had (and still has) a good relationship with her family. Irina went to a branch of schools called Pioneer Schools: which are similar to Girl Scouts and Boy Scouts.

Irina immigrated to Atlanta, Georgia, in 2006. Her main drive to make the move was to be with her family. She had two daughters that lived in the US, and she wanted to join them. Her first job in America was as an Arabic teacher at a high school. She had so much courage to teach in a new country while trying to learn English. In 2012 she decided to move to California, and now resides in the Bay Area. Although she is nostalgic about her hometown in Moscow, she loves life in America.

Irina is very happy to have made the move to California and she frequently visits her family who live half-an-hour away. She has a very special bond with one of her elementary school age granddaughters; her granddaughter frequently asks Irina for advice about boys in her class, and whether they will be “The One.”

Irina’s advice for immigrants or people who are going to immigrate is to leave your clothes with close family so that you do not lose them. Her advice for students who want to prosper in life is to learn languages so you can travel, stay healthy to live longer, play sports, exercise and swim to stay fit, laugh a lot because it makes you happier, and finally, never give up on your dreams. Irina believes that if you believe in something and really try; you can achieve it.

This interview was conducted and written by 8th grade Castilleja School students, Aurelia Balkanski, Talia Kertsman, Alexandra Burdon, and Sarah Booher. Below are two art pieces that were inspired by their interview. 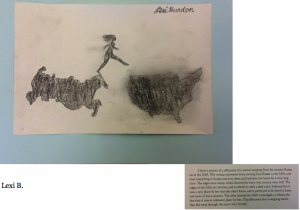 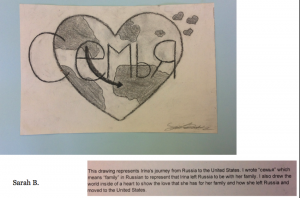