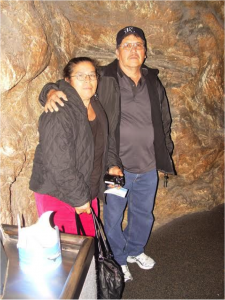 It was 1977 when Gonzalo was left in an orphanage in Puebla, Mexico while he was still a child. For about 12 years Gonzalo lived in the orphanage. Gonzalo did all kinds of things in the orphanage, things such as picking up the cow poop, milking goats, and going to other cities in Mexico. One thing Gonzalo liked about the orphanage was that they let him sing “Canciones Rancheras” and people would come and see him. However he was always thinking about why his father left him. He thought that his father left him because his father was irresponsible, or maybe he was scared and didn’t know how to take care of a kid since Gonzalo was his first son.

While Gonzalo was in the orphanage he went to school there and when he got adopted he kept studying. In his free time he liked to help his adoptive mom clean the house. He also liked to hang out with friends from school and with those friends they made a little gang named, “Los Diablos.” When they hung out together they liked to look for trouble and go to parties and make a “Desmadre.” The gang got bigger and at the end it had about 220 members.

Since Gonzalo had a gang of his own, he never faced the fact that he was adopted and that he didn’t know his biological father. He never thought about looking for his father because he had so much hatred towards him. It was probably the reason he got into fights. This is what he thought about his father, “When I see him I’m going to kick his butt.”

His adoptive mother decided to get married. Later, his adoptive mother had a child and she paid more attention to the newborn because she gave birth to the newborn. Gonzalo started to feel lonely and all kinds of thoughts came to his head. He thought about getting a job and renting his own apartment. He thought about living with his friends. Finally he decided that he would come to U.S. to make his own family and new friends.

After Gonzalo decided that he would come to the U.S. he told his mom and his mom told him, “ok mijo, pero te cuidas cuando estes alla,” which means; “Ok son, but just be careful over there.” They had a family friend named Daniel and his mom asked Daniel if he was willing to bring Gonzalo with him the next time he went to the US. Daniel and Gonzalo had a rough way here. They had to walk for three days straight without stopping to rest. As soon as they crossed the border a van picked them up and took them to Los Angeles.

On their way to L.A. Daniel and him were blindfolded so they wouldn’t tell anyone where they were holding other immigrants. After they paid the guy who brought Daniel and Gonzalo they blindfolded them again and took them to a gas station where Daniel’s’ family picked both of them up and brought here to Redwood City. Gonzalo thought he had lost stuff on the way here but he only brought a credential that proved that he was Mexican in case they detained them in Mexico.

When he arrived here in the U.S. he felt happy and excited because he felt like a completely different person. He also felt like he could have a better way of thinking and a better life here. He also thought that this could be a new beginning or a new chapter in his life, like he could finally prove himself worth something. When he got here he stayed with Daniel and his family. He lived in the living-room for about two months and then he said, “I’m out of here.” He decided to leave because there were about nine people living there and they always walked over him. He packed his stuff and moved in into another living-room with less people. There were about three people living there including himself.

Gonzalo couldn’t go to High School because he had to work to maintain himself. He had to pay for his rent, for his clothes, for his food and for anything else. He also sent money to his adoptive mother in Mexico. However, he went to Cañada College just to learn English so he could understand people. At this time he was living with my mom. They had their own little apartment.

Gonzalo had a friend that worked as a painter and he showed him how to paint. Then his friend got fired because he was irresponsible and my dad got to work there as a painter. He had two jobs before he got the painting job. Before he was a sign painter, he was a house painter and he worked with his friend Daniel. His second job was as a waiter in a hotel After two years they fired him because they found out that he was illegal.

Over time Gonzalo had a better life, a wife, and three beautiful kids. He thought about looking for his biological father. He searched in Google, and when the results came he started to look page by page. When he thought he found the right guy he emailed him. It was his father. He told him he was his son. His father was willing to come to the U.S. and meet, and so he did. He came by car and legally, he was here with his family for about three days and then he left back to Mexico. While his father was here Gonzalo took him all around the Bay area.

This story was written by Gonzalo’s son, Edgar Gutierrez, a 9th grader in Redwood City, CA.