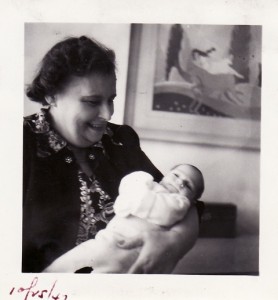 This is a story about my Grandma Ida.

Here is what I know: She came to the United States from Russia around 1910, when she was fourteen years old. Before she left, it was a dangerous time to be a Jew in her village; there were a lot of pogroms, and even though she was just a young girl, she and her friends weren’t allowed to ever stand or walk together in a group of three or more, or the Cossack soldiers would rough them up to separate them.

My Grandma Ida told me these things while she knitted, clackety-clack, an afghan for me. She was always knitting something.
She came through Ellis Island, and lived with her older sister Edith and Edith’s husband, in New Jersey. She worked in a button factory, and earned maybe ten cents a day. Three of those cents bought her daily lunch: a kipper (small fish) and a roll of bread. When she was sixteen she married Edith’s husband’s brother, my Grandpa Izzy. When she was seventeen, she gave birth to a still-born baby boy. When she was nineteen, she gave birth to my mother, at home, because she was afraid if she went to the hospital, the baby would die again.

These things she told me while she sipped a cup of hot tea, with a sugar cube between her teeth. Sometimes she’d tell me about the silver samovar in her nice house in her village, which kept the tea hot all day. She told me very little about Russia, because she always started to cry when she talked about her home, and her mother. Somewhere there is a photograph of some stern looking people posing, and I wonder if one of them is my great-grandmother. My mother would get upset at me for asking questions that made my grandmother so sad, so I stopped asking.

Izzy and Ida had a laundry, first in New Jersey, and then later on, in New York. My grandma would wash and iron other people’s clothes, every day, except Saturday. She put my mother in one of those rolling laundry baskets, to play by herself while she and her husband worked. This she told me when she ironed a shirt for me, teaching me how to smooth the cuffs and straighten the collar. She ironed with a damp cloth to make steam. Whenever I smell steam from a hot iron, that is always my grandmother to me.

My grandfather died when he was 68, and after that my grandmother would visit us, sometimes for a month or two at a time, to get away from the New York winters and not be alone. The year my grandmother died, I was the same age she was when she became a mother. I was a wild college girl, and she had lost a son and was raising a daughter. I worked at posh department stores during school breaks, and she scrubbed and washed and ironed and cooked and cleaned every single day. I wish I had asked her so much more; I wish I could tell her story the way it deserves to be told.

Here is a video of Dey telling the story of her grandmother and herself.