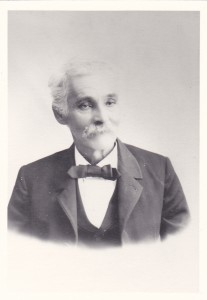 My grandfather’s father, Hugh Crawford, came to the US from Ireland with his older brother, during the years of massive Irish immigration due to the potato famine. As young men of 16 and 18, they purchased a farm in Ohio with their portion of their family farm. Soon, their parents and younger siblings joined them, selling their farm in Northern Ireland.

My grandfather, James Crawford, became a journalist and teacher in Ohio, and married my grandmother, Lura Palmer, whose family had immigrated from England. In the early 1900’s, my grandfather sold his share of the farm in Ohio, and he and Lura moved to Los Angeles.

With the money from the farm, my grandfather bought run-down apartment houses in downtown Los Angeles. He and my grandmother painted walls, replaced carpets, made repairs, filled them with tenants, and sold the buildings at a profit. Over 8 years or so, they bought and sold about 20 apartment buildings.

My grandfather moved to Burbank, California,  when it was being newly developed. He became mayor of Burbank and founding president of the Rotary Club. He worked (politically) on the Hetch Hetchy waterway project connecting Northern and Southern California. He became an assemblyman for his district, as well as a prominent real estate developer.http://www.joincalifornia.com/candidate/9716 and http://en.wikipedia.org/wiki/Burbank,_California

He was able to build his dream house for his family, on land that was adjacent to land subsequently sold to build the Burbank airport. As children, my mother and her brothers met and have autographs from Charles Lindbergh, Howard Hughes, and dozens of movie stars who flew in and out of the Burbank airport. Their life was idyllic, and both my uncles became CalTech educated Aeronautical Engineers, and had prominent careers with the space industry.

My grandfather, James Crawford, was active in local and state government, and at the same time had an extensive hobby in farming and gardening, and developed several patented methods for automatic seed tape planting.

Later, during the war, he supported a Japanese family who lived on his property so that they would be protected from going to an internment camp.

He died when I was four, but because he was fully retired at this point, I spent many hours with him and my grandmother, and he enjoyed teaching me simple magic tricks while my grandmother made our lunch.

My family, being Scots-Irish, was always very thrifty. We had money for doctor appointments, adequate food, and no bills would be paid late, but no money would be wasted. Education, working hard, being independent and taking care of oneself were highly valued.

My family was anti-war, believing that evolution impels humans to engage their intellect and communication skills to solve problems. “We are farmers, not fighters,” my grandfather would say. They revered scientific thought, and believed strongly in the  separation of church and state. Religious beliefs were merged with a personal moral code, which was stronger than any not personally wrested from philosophical thought and knowledge. 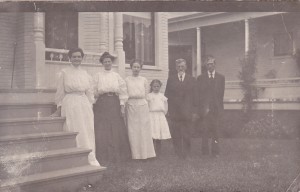 Hugh is second from right.