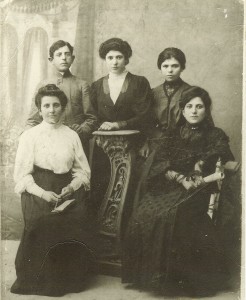 (Editor’s Note: This is a bit of a departure from the usual format. It is a fascinating research paper written by Maddie Bennet, for her 11th grade US History class at Kehillah Jewish High School in Palo Alto, CA.)

I am a third generation American Jew, and, like many Jews, my roots go back to Eastern Europe.  My research focuses on my mother’s side of the family, specifically three of my four great grandparents.  All three of them were Jewish and came from Russia or Poland depending when the borders were drawn. They all emigrated from Eastern Europe during the tension before World War I, seeking a better life.

Life for Jews in Czarist Russia was difficult and conditions worsened over time.  In the mid 1800s military training schools were formed.  Young Jewish boys as young as 8 years old were taken from their families to be trained until they were 18 and then forced to serve in the Russian military for 25 years.Conditions in Russia worsened further in the late 1800s as the Jews were blamed for the death of Czar Alexander II and due to the rumor that the Jews killed the Czar there were many Pogroms.  As the economic situation in Russia worsened so did life for the Jews.  The government used pogroms to focus anger on the Jews instead of on the government.  In 1882 Alexander III put the “May Laws” into effect.  These laws restricted the Jews’ ability to work, travel and live where they wanted.

Russia took much pride in its military and the defeat of Russia in 1904 in Russo-Japanese war was a great embarrassment.  The loss of the war was “one the immediate causes of the Russian Revolution of 1905.”   The Czar put down the revolution and claimed that 90 percent of the revolutionaries were Jews. Immediately after the war there were approximately 300 pogroms with over 50,000 casualties.It was around this time that the older siblings of my grandparents began to leave Russia.

The Russian army was such a dangerous place for young Jews that many parents would do anything to get out of service, even going far as cutting off their son’s index finger so they were unable to fire a gun.  Fortunately my maternal great-grandfather, Sam Kopelov, came from relatively wealthy family and his parents paid a crippled man to say he was “Sam Kopelov”.  Unfortunately he was not crippled enough for the Russian army and he was drafted and revealed the truth.  My great grandfather was in danger of being drafted or killed and needed to escape quickly.   Seeing as he had older brothers in America they decided to send him there.  They owned a lumber company in Latvia so they sent him to Germany in a wagon, buried under a pile of wood.  From Germany he bought passage to America and arrived in 1915.  My other maternal Great Grandfather, Hyman Dorosin, was a bit of a revolutionary against the Czar according to family lore.  He lived in the town of Minsk in Belarus and at the age of 15 he was outside when a Pogrom was starting and a kind policemen helped him get home safely. However, the situation continued to deteriorate and he too emigrated to the United States in 1909.  My great grandmother, Irene Fine Dorosin, was from a small town called Kamai in Lithuania.  The town was very poor and she too came from a poor family. In 1903 during the Russo-Japanese war her brother was sent to America to avoid the draft and for new opportunities.  Irene remained behind until 1913 when her father died and her brothers finally sent for her, her two sisters and her mother.

All three of my of my great grandparents arrived in the United States through Ellis Island.  This horrible trip took one week and the least expensive was $31, the equivalent of $800 in 2010. The boats were crowded, diseases spread quickly and there was no privacy.  Men and women shared bathrooms and the food was practically inedible and there was no kosher food alternative. There was great difficulty in communicating with others as the immigrants spoke many different languages.

My mother’s paternal grandfather, Hyman, lived in a tenement house in the lower east side of New York City, like many other Jewish immigrants.  It was so crowded that there was no bed for him and he slept on a table.  He worked in the garment industry, which was very common, and there were “approximately 60% of employed Jews working the garment industry.”  Hyman was a cloth cutter, which according to his son he actually enjoyed.  From the pictures, it appeared he began to assimilate.  He cut his beard almost immediately and began to go to night school to learn English.  After a few years in New York my great grandfather moved to Marshalltown, Iowa to work at his brothers’ store.  My other two great grandparents went straight to the Midwest to join the relatives who had come before them.

After The Great War, immigration to America was restricted. There were limits placed on how many Eastern Europeans could come to the United States and new Jewish immigration slowed from over 100,000 per year to approximately 10,000 per year.  The immigrant population slowly became more “Americanized” and began to enter the middle class.

My family followed this pattern, coming in the early 1900s and beginning to establish themselves after World War I.  In March of 1919, Sam Kopelov  married Bessie in Springfield, Ohio.  Later that year he moved to Kokomo, Indiana and opened the LaMode Coat and Suit Co.  The store opened on February 20, 1920 and the grand opening ad said that it was “an event that will live in your memory for many, many months!”  My great grandparents established themselves in Kokomo, raising four children there, including my grandmother, and lived there until their deaths.  One can see how he kept his Jewish identity and assimilated by looking at his community activities.  He was a founding member and the first president of Temple B’nai Israel and was the chairman of the Jewish Welfare Foundation multiple times.  In addition he was a member of the Elks Lodge and the Rotary Club, was on the board of St. Joseph Memorial Hospital and was a “key figure in the World War II ‘Bundles for Britain’ effort.  According to a tribute to Sam Kopelov published in Our Town and titled “What Makes Sammy Run?, his community involvement made both Sammy and his store very popular.  As a member of his community said “he was a fine citizen, a fine businessman and man I never heard utter an unkind word about anyone”

By the 1920s my grandfather’s family was living in Marshalltown, Iowa. Through his sister, my great grandfather met a young woman from Chicago, Irene Fine and they were married in May 27, 1923.  They lived Marshalltown until after World War II.  Several times each week the extended family would gather to debate and discuss controversial topics and issues or play bridge.  According to their son Norman Dorosin, “There were heated conversations, mostly about politics and Jewish issues.  At the end of the 1930s, my family owned three clothing stores in Marshalltown.  After the Second World War, the family started moving west to California, first the sons, including my grandfather, and finally my great-grandparents in 1963.  World War II had a significant impact on this side of the family.  According to my youngest great uncle, the two older brothers who came of age before the War, considered themselves immigrants and outsiders.  However they both served in the United States army and after the war, they were American Veterans. The two much younger brothers came of age after the war and always felt American, especially with war veteran brothers. This was a turning point in the family’s assimilation to the United States. 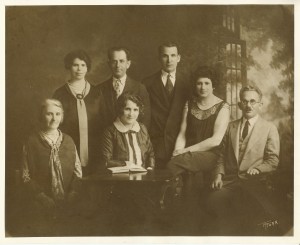