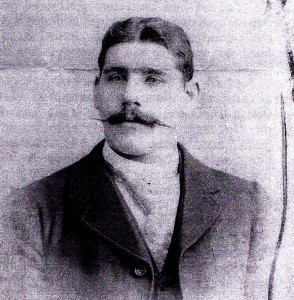 Grandpa Henry Drekmeier spent happy hours skating on the frozen estuaries of the Rhein near Bremerhaven where he was born. I suspect this may have been in the late 1860’s since he fathered the first of his five children in 1896. In order to avoid the Bismarckian military conscription he joined the German merchant marine and spent several years sailing for the most part in the China Seas.

I remember his regaling my sister and me with stories of the frequent typhoons that would panic the Muhammedans (as Muslims were then called) who were on their way to Jeddah (Mecca’s port) for the needed once-per-life ‘hajj.’ These poor men, in their fright, would often attempt to throw themselves overboard and young Henry would have to sit on them to prevent this disaster. The image of a man rather slight (as I am) sitting on a Muslim – perhaps two at a time – has stayed with me over the years……while the ebony flute with ivory mouth-head, which he gave me has not. But – maybe in his memory – I’ve kept up with the flute.

After a few years he jumped ship in Hoboken, NJ and found his way to a German community in central Wisconsin. Tomah, where the photo was taken, was then sandwiched between a military base (McGill or McCoy) and a tribal installation. Henry worked as an engineer for the railroad (not the kind at the controls) and, as Germans from the other end of the German Baltic moved into Tomah, met and married Mathilde Wagner. (The family is filled with Wagners and Bachs – but probably not the distinguished lineage.) Fraulein Wagner grew up in Stettin, which is now Polish and has the unpronounceable name, Szczecin. German was the language not only in the churches but also in the parochial schools. My father (Henry and Mathilde’s son) didn’t speak much English until he was about 13 years old.

I was fairly young when my grandmother died but I remember her as immense (very different from the dogs named from her native Pomerania), as a renowned producer of potato pancakes and other Teutonic delights, the recipes of which remained her secret. At her funeral in my aunt’s house, the open casket was surrounded by family, subdued Liebestod farewells, and the ever-present cigar smoke of male Dreks, Bachs, and Wagners. We children (two granddaughters ages 4 and 7, my sister and I ages 3 and 1/2 and 5) were invited to give the body a last kiss; a suggestion the Britannic-side of the family vetoed.

Grandma Drekmeier was preceded in death by her sister, Augusta Wagner, a woman as diminutive as Mathilde was large. But her position in the family reflected her name. She was, I’m told, a modest person. But, as the Kaiser’s head seamstress, she carried the imperial mantle which gave her remarkable authority in that household. The fact (if it is indeed that) that transformed this delicate woman, Aunt ‘Gustie’ into a Valkyrie. (editor’s note: Wikipedia says that a Valkyrie is described in Norse mythology as the daughters of royalty, who decided the fates of soldiers.)

After the abdication she went to Holland with the royal family, eventually emigrating to Wisconsin in 1924. The family never completely assimilated. The world wars challenged their loyalties and Grandpa D. received letters from the Third Reich as late as 1941. He never saw them; they were burned immediately by my aunt, with whom he lived. I suspect they were queries about friendly receptions the Germans would enjoy when the invasion came. So conservative.

My father, his brothers and brother-in-law all of whom were druggists, had to open themselves to the larger world. That much can be said for the “klein handler” (retailer) mentality.