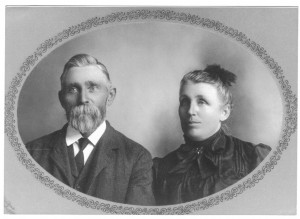 Hans (1846 – 1908) was born in Denmark and immigrated to Illinois in the early 1870’s. Probably he left to avoid being drafted into Bismark’s German army. A short time later, he and a close friend, Martin Nelson moved to Texas. Then Hans sent for his German fiancée, Ida, (1852 – 1931) to join him. Hans’ brother Jorgen Theodor Vinther accompanied Ida to Dallas where she and Hans were married in December, 1873. They settled and started a family near Godley, Texas, where they farmed, raised sheep, and operated a dairy. They sold butter in Fort Worth. They had eight children. After Hans died in 1908, the children and Ida continued the farm operations. Later she visited and lived with her children on a rotating basis until her death in 1931.

This account was shared by W. J. McCroskey, the grandson of Hans and Ida and a member of the Palo Alto First Presbyterian Church.